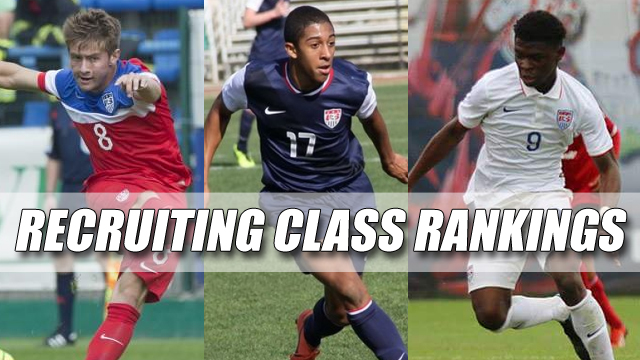 The biggest moment in many young soccer players lives is only a few weeks away. On Feb. 3, recruits can begin signing their National Letter of Intent to universities across the country. For many, it is a longtime dream realized. For college coaches, it is a glimmer of hope that the next wave of recruits could be the one that leads the program to a national championship.

Prior to the big day, TopDrawerSoccer takes a look at the top 10 recruiting classes based on verbal commitments given by the players to the site. If you wish to report a commitment to TDS, please email commit@topdrawersoccer.com. Recruiting class rankings will be updated throughout 2016 up until the start of the college soccer season.

The Tar Heels have an impressive number of players headed to Chapel Hill in 2016. As of Jan. 7, there are nine players who given their verbal commitments to the ACC program. U.S. youth national team midfielder Cameron Lindley headlines the list. The two-sport standout helped Chicago Fire win the Development Academy National Championship in 2015 as well as propelling his high school basketball team to the state championship in Indiana. Could he do the same at the collegiate level? Defenders Nicholas Hinds, Mauricio Pineda, and Auston Trusty make up a quality haul in their own right. Hinds, a Kendall SC product, is now playing with the Seattle Sounders Academy. Mauricio Pineda has been a stud of the Chicago Fire Academy for a number of years. Austin Trusty jumped into the national spotlight last season with a great campaign for the Philadelphia Union. As with any top MLS academy player, there is always the possibility that those clubs try to lure their talents to stay in house instead of heading to the college game. If everyone does end up with the Tar Heels, this is a tremendous recruiting class.