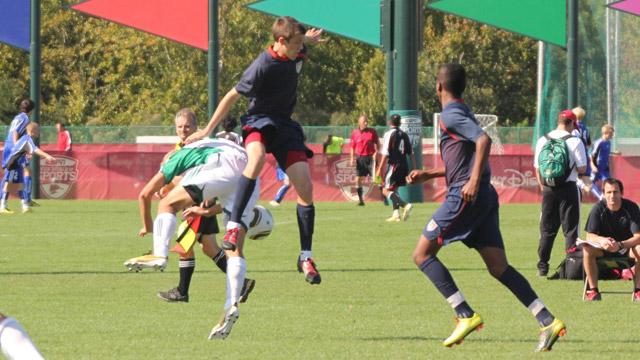 The other U.S. squad won its match 3-1, with a full slate of games played between regional teams at the ’96 and ’97 age groups. 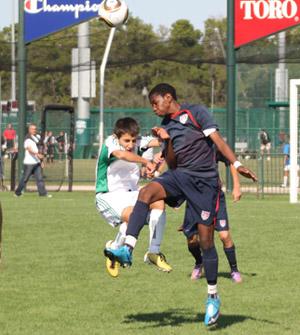 The match lacked a little bit in tempo compared to the opening two days of the event, as tired legs may have been an issue for both teams. The Region II was very well organized however and limited the U14 BNT’s chances, especially in the 1st  half.

Top performers for the Midwesterners on the day included hard-working forward Alex Knox of Carmel United, midfielder Brendan McDonough of Tony Glavin SC in St. Louis, defender Willie Maddox of Detroit-area club Vardar, and diminutive substitute Grant Hollkamp of Louisville club Javanon, who showed some really good quality on the ball and a real composure when it came to getting out of tight spaces.

For the U.S., center backs Guillermo Bermudez of Albion SC in San Diego, Billy Abdallah of Cosmos Academy West in LA, plus Chester Castellaw of Real SoCal, had solid performances. Forward Caleb Moore of Discoveries SC in South Carolina again was dangerous as a motoring frontrunner. Goalkeeper Nicolas Pritchard is quick off his line.

The group coached by Bob Montgomery and Mario Prata cruised to a 3-0 halftime lead and then hung on for the win.

{mosvideo:350}Columbus Crew midfielder Benny Swanson scored a sick goal in the opening minutes, dribbling past two defenders and then the goalkeeper before passing it into the open net for a 1-0 lead. Amadu Kunateh of North Shore United in Boston then connected for two scores, including one from a very sharp angle. The big and fast forward has a lot of physical qualities and based on his comments (made along with Benny Swanson), seems to be working on his soccer brain too.

The star of the 2nd half was Region III substitute Tobin Howell. The smallest player of the field was inserted by coach Jay Miller as a right-sided midfielder and he responded with an excellent performance, almost never putting in a bad touch of the ball. Howell scored the team’s only goal by taking a pass from Fusion FC’s Bryan Missana, making a sharp cut move to lose his marker and then drilling a shot from the elbow of the penalty area just inside the far post and under the cross bar for a goal.

Howell nearly scored another when he made an audacious touch over a defender, ran onto it and then chipped past the goalkeeper, but the effort from a sharp angle went into the side netting. He gave away nothing despite his small stature and used his ability and foot skills very effectively.

U.S. defender Brendan Constantine of Oakwood SC also put in a good shift, covering a lot of ground in the back line and distributing well.