Roster announced for U18 MNT camp in KC 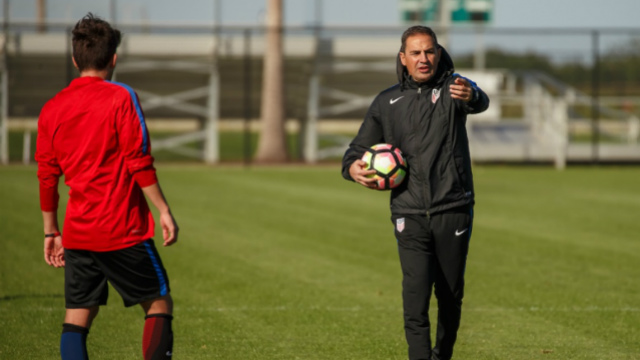 The U.S. Under-18 Men’s National Team will gather for its fourth training camp of the 2018-19 cycle from June 4-11 at the U.S. Soccer National Development Center in Kansas City, Kan.

U-18 MNT head coach Omid Namazi will run the camp and has called up 27 players, all born in 2001. This group of players is six months into its two-year cycle as U-18s before transitioning to U-20s in 2020 and will form the core of the group that will eventually attempt to qualify for the 2021 FIFA U-20 World Cup.

The group got off to an early start to its cycle with a training camp at the Chula Vista Elite Athlete Training Center in November 2017, and took part in the first ever U.S. Soccer Men's YNT Summit two months later. Most recently, the U-18 MNT defeated Costa Rica twice (2-1 and 3-0), as part of a domestic camp in Orlando, Fla.

A total of 14 players are being called up to the U-18 MNT for the first time: two goalkeepers, five defenders, three midfielders and four forwards. Three of those first-time call-ups currently play for international clubs: Michael Carmona (Atletico Madrid), Salvatore Esposito (S.S.C. Napoli) and Charlie Kelman (Southend United).

Of the 27 players brought into camp, all 24 of the domestic-based players have registered at least one season in the U.S. Soccer Development Academy. Forward Quincy Butler, midfielders Marcelo Palomino and Justin Haak, and goalkeeper John Pulskamp collectively lead the roster in that regard, each having competed in the Academy program for five seasons.

The camp marks the first time that any Men’s or Women’s Youth or Senior National Team will train at the NDC. Surrounded by three full size natural grass fields and two synthetic turf fields, the $75 million education and medical center was built in collaboration with MLS club Sporting Kansas City and Children’s Mercy Hospital.