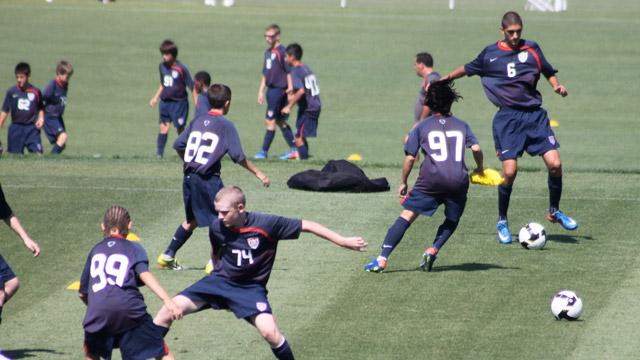 CARSON, California – For this week, smaller is better.

Coach Manny Schellscheidt has scaled down the U14 Boys National Team Identification Camp in a way that differentiates it from past gatherings. And that, is precisely the point.

Rather than rolling out the 80-player group in a series of 11v11 scrimmages, as has been the case in previous years, these U14s are being evaluated in more compact groupings. The first two days of the first-timer camp has consisted of small group trainings and 7v7 matches.

Schellscheidt said this has helped to simplify things for a group of players going through their first national camp experience. 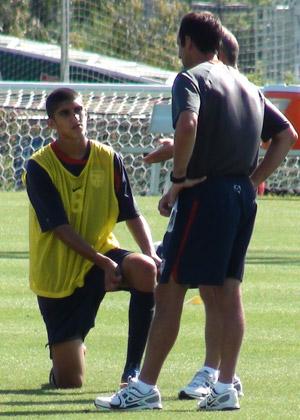 Daniel Barbir
“It’s just more of what they’re comfortable with; it doesn’t make sense to have a bunch of tired bodies at the end of the day. We want to keep it within the limits of what they’re capable of,” Schellscheidt said. “It wouldn’t make sense to play in bigger numbers on bigger fields. We want to keep smaller guys in smaller numbers on smaller fields.

“We can see how it pans out and by the end of the week have a better idea of what works.”

The early returns have been exciting. With the midfield eliminated, the young standouts are getting the opportunity to show what they are capable of in front of the net.
Tuesday’s action featured a new cast of intriguing players.

Striker Christian Pullsic is a diminutive attacker who plays fearlessly and showed some good signs during scrimmages. A left-footed forward, he proved capable of getting to good spots to get his shot off and was not deterred by the physical play of bigger opponents. Pullsic also combined well with midfielder Dawson McCartney, another smallish player who held his own.

Possessing more size and plenty of athleticism, Joshua Perez was hard to miss as he pursued the ball and leaped around the pitch with boundless energy. A similarly dynamic prospect was Columbus Crew’s Deihnia who was an absolute blur with the ball. Deihnia kicked his speed into another gear with the ball at his feet and showed the ability to stop on a dime and get off shots quickly.
Other standout attackers included Folasanmi Adetola, an agile and shifty attacker, along with finisher Sean Teixeira.

On the defensive side, Daniel Barbir is the tallest player in camp and provides a tough obstruction for attackers. He proved difficult to avoid for smaller offensive players.
For the second straight day, goalkeeper Andrew Romig played with great energy and showed no problems communicating with his teammates.

Schellscheidt indicated that the group will likely see some 11v11 action before the week is out, but for now he’ll jumpstart the youngsters into action by going smaller.

“We have the luxury of experimenting,” he said. “We can always change.”