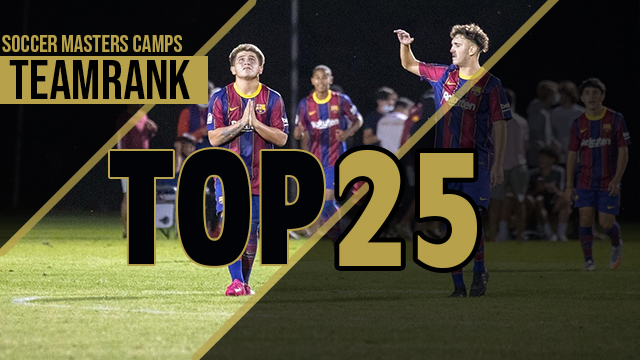 The boys club soccer season has not been a smooth process. With the global pandemic, the normal cross-country events hit a pause and even some states had a lengthy delay to kick off the campaign.

With ever state in action now, there is a bit of normalcy, but intrastate competition is still not the normal. Playoffs are on the schedule for the leagues, but who knows what that will look like considering what the season has been like up until this point.

The TopDrawerSoccer TeamRank, presented by Soccer Masters, takes a new look at the U18/19, U17, and U16 age groups in the boys club soccer world for the first update to the May edition to the club soccer team rankings.

Real Colorado makes the big move up in the rankings. The MLS Next squad is 5-0 on the season with eight goals for, and one goal concede. Barca Academy and PDA, both undefeated in MLS Next league play, are also in the top three during this update.

San Diego Surf checks in with a spot in the top five. Surf, an ECNL squad, faces a big upcoming test on Saturday against FC Golden State East. With only a limited number of playoff spots in the U18/19 age group, this could be a decisive tilt between two of the powerhouse youth clubs from Southern California.

Check out the full rankings for the U18/19 age group with the May update.

LAFC MLS Next 04 makes the big move up. The MLS Academy is 3-0 on the season. The Southern California squad faces a big challenge this weekend with a game against Albion SC in MLS Next action. Albion SC is 4-1 on the season, and playing with a chip on the shoulder.

Bethesda SC also has a big challenge ahead this weekend with a game against New York Red Bulls academy. Bethesda SC is 4-0 on the campaign and looking like the team to beat in the region.

Check out the full rankings for the U17 age group with the May update.

Saint Louis FC is 3-0 on the season and putting up big victories along the way. St. Louis has a big game this weekend against Sockers. Both teams are vying for spots at the top of the standings.

In the Boys ECNL, there is a big game between Strikers and San Diego Surf upcoming. Both teams look like contenders in the conference and national level which should make for a terrific game.

Check out the full rankings for the U16 age group with the May update.