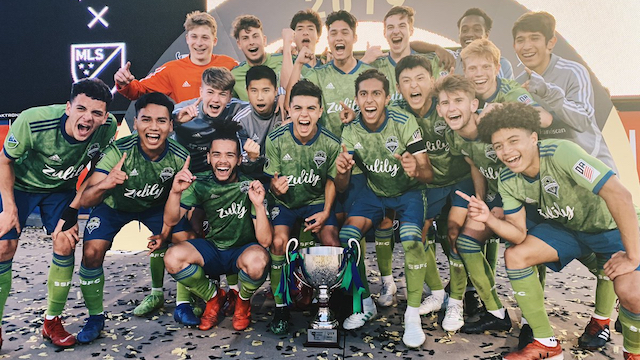 The Sounders ended their historic run at the 2019 Generation adidas Cup in glory on Saturday with a thrilling victory in the Championship Division finale. After battling for 78 scoreless minutes, Ray ‘the Hero of Moses Lake’ Serrano Lopez delivered the decisive moment with a beautiful header on a cross from Alfonso ‘Golden Boot’ Ocampo Chavez in extra time. Serrano’s goal sealed the 1-0 win in the championship bout between the MLS side and Valencia CF (Spain).

There were a number of standouts on the day for Seattle. Goalkeeper Conrad Lee recorded his third shutout in a row from the knockout rounds of the competition. Right back Bryson Hankins was terrific. Fellow defenders Josh Atencio, Elias Katsaros, and Sota Kitahara were all rocks against a very good Valencia side. Daniel Leyva and Chris Hegardt battled in the midfield against Valencia.

The picture-perfect assist for Ocampo Chavez was a redemption story after the Golden Boot winner missed an open net chance in the second half. Ocampo Chavez beat the Valencia goalkeeper to the ball and touched it past the last man for a clear chance the opening goal. However, Ocampo Chavez pushed his left-footed shot wide of the net and collapsed to the ground in embarrassment and frustration.

However, the forward’s work rate never faltered and he pressured the Valencia defense into a few sloppily passes (and clearly got into the head of a few players as he drew a yellow card). The mentality shown through when he chased down a ball in overtime and put in the winning assist for Serrano Lopez’s finish. Ocampo-Chavez finished the event as the joint leading scorer with six goals from six games.

Seattle’s championship effort redeemed an otherwise forgettable day for MLS academies as all four of the U15 sides lost to their Liga MX competition earlier in the day including Toronto FC’s defeat in penalty kicks to Chivas in the championship game from that age group. LAFC also lost in penalty kicks in the third place game to Leon.

Seattle’s squad has been a glimpse of the possibility for MLS franchises when they hire the right people and devote the proper resources to the youth teams. Sounders won the Premier Division at the competition last year - thanks to a number of the players from this year’s Championship Division winning side.

With five players already signed to professional contracts, the Sounders have been careful to keep their top talent in house. Although, only midfielder Daniel Leyva is on an MLS deal while Ocampo-Chavez, Serrano, Atencio, and Daniel Robles are signed to USL contracts with the Tacoma Defiance. It seems like only a matter of time before some others matriculated to the first team wearing Emerald Green.