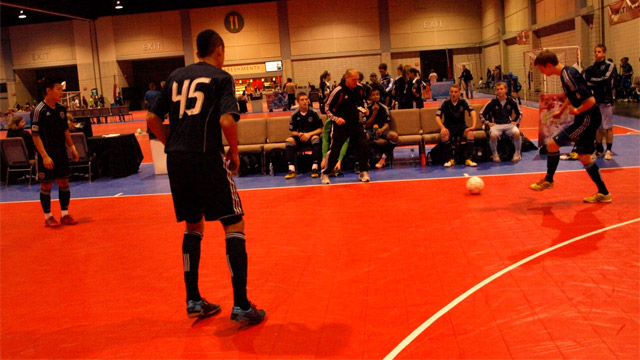 With six wins from six games, the Sporting Kansas City Academy is one of the top clubs in the USSF’s Development Academy through the opening weeks of the season.

The secret to Sporting’s success may be off the field though.

Academy Director of Coaching Jon Parry is a firm believer in the positive role of Futsal, five-a-side indoor soccer with no walls, in a player’s development. 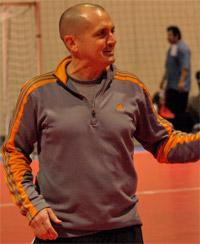 “I’m a huge fan of it,” Parry told TopDrawerSoccer.com. “I have a very close relationship with Keith Tozier, the U.S. Futsal National Team head coach.”

Parry went on to say that Sporting Kansas City head coach Peter Vermes was a member of the first ever U.S. Futsal World Cup team. Vermes scored six goals during that event while leading the team to a third place finish.

Sporting clearly believes in it, and so does the city.

“Last year, we had 287 teams sign up for the local league . . . most we have ever had,” Parry said. “This year, we closed registration a week early because we had already reached 400 teams. That’s over 4,000 kids in Kansas City alone!”

This growth has taken time though. Parry said when he would first walk into a meeting with local club coaches; only one or two would raise their hands when asked if they knew about Futsal.

Parry takes a unique approach when implementing the game with the youth teams at his club.

The Sporting Kansas City Academy consists of four teams (U12, U14, U16, and U18) for the two older age groups, the Futsal season only lasts for a few months and the teams continue to train outdoors during that period as well.

“We use it during winter time,” Parry explained. “We split the U18 and U16 teams into six equal teams.”

It is not just scrimmages though. The club brings in referees and keeps everything official for the games to keep the level up.

“It is very competitive. Our academy teams really enjoy it.”

Parry’s enthusiasm about the sport led him on a trip to Spain last month with the adidas International Training Program. Parry along with six others visited two professional Futsal clubs there as well as getting the chance to see Barcelona’s setup.

“They are the only La Liga club with a professional Futsal team too. It was unique to see how it goes – at a certain age, maybe U13 or U14, they begin to concentrate on either Futsal or soccer.”

The hope is for this to be an ongoing relationship between some of the Spanish Futsal clubs and Sporting.

Sporting’s success is not only attributed to Futsal though. Over the last few years, Parry and his staff have cultivated a group of talented young players, which are passing through the youth club now.

This season’s early results reflect that and a preseason that did not include any fitness test.

“Everything was through our drills,” Parry said about getting ready for the season. “At the end of the games, we are still pressing and it is evident that our preseason is paying off.”

The preseason lasted six weeks and included a few scrimmages.

A number of Academy players also got a chance to play with the Sporting Kansas City Reserve team during the Academy’s preseason, which was an invaluable experience for players like David Leichty, Eduardo Moreno, and Erik Palmer-Brown.

Parry described Leichty as a center midfielder who has really matured recently and one of the players the club is looking at for down the road.

“[Eduardo] Moreno has done extremely well for us,” Parry said. “He has a chance to be with the first team during next year’s preseason.”

The youngest of the trio is Erik Palmer-Brown who is a member of the U.S. U15 Boys National Team. The fluid center back is playing up three ages with the U18 squad this season.

Parry believes Palmer-Brown has the tools, but it is about refining certain parts of his game now to make it to the next level.

“Technically, he has to get better. He needs to clean up his technique,” Parry said when asked about getting Palmer-Brown to the professional level. “His training habits need to be sharper too. The other challenge is mentally. Can he handle with the grind every day?”

For Palmer-Brown, there is still a long road ahead in his development, which likely includes a stop or two at the Futsal court before making it to Livestrong Sporting Park.