Alfred Koroma has been around the world and back over the past year, his talent opening doors as he looked to cement a home for the next phase of his soccer career.

At last, it looks as though he may have found it.

Koroma has announced his verbal commitment to Akron, choosing the Zips over just about every other program in the country as they were all lining up for his services in hopes he would go the college route.

Our No. 3 ranked player in the 2012 class, college was far from a forgone conclusion for Koroma who was one of the absolute stars on this past summer’s U17 World Cup Team. 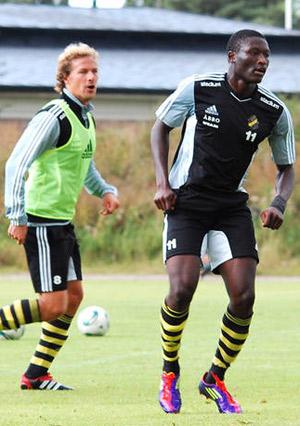 Koroma on trial
He spent part of the rest of his summer going on professional trials, mostly to Scandinavian countries like AIK in Sweden. In fact, he didn’t even have time to go on any college campus visits.

But with Akron, he didn’t have to - he knows all he needs to.

“Akron has produced some of the finest strikers in the MLS, and that really reflects their coaching staff,” Koroma said. “I like their attacking style, and if I work hard and listen I can improve my game and eventually reach my dream of being a professional.”

Koroma is a game-changing striker who demands extra attention from the defense. As his game evolves he said he’s learning to use his teammates much better as he displayed in playing with Solar Chelsea SC at the recent Development Academy Winter Showcase.

“Sometimes in the past it’s been kind of a one-man show when I’ve played, but I’ve learned to rely on my teammates and that makes the game easier,” he said. “I know a lot of the Akron guys from the 2012 class, so that will help.”

In other boy’s commitment news:

Julius Rosa-DiStefano has verbally committed to George Mason for the 2012 season.

Patrick Conroy (Lou Fusz) has verbally committed to Saint Louis for the 2012 season.

Brandon Medina has transferred from St. Ignatius College Prep to Northwestern for the 2012 season.

IUPUI has picked up a pair of transfers for 2012: Sean McGrath, previously of Notre Dame, along with Ryan Onwukwe from UW Parksiden.