The second of this year’s TDS combine series brought us to the beautiful city of Atlanta, Ga. Coming off the back of a hugely successful Nor-Cal combine Atlanta had a lot to live up to and did not disappoint.

Georgia Soccer Park played host to some of the southeast regions top schools that included the University of Florida and South Carolina. Top players from in and around the area were able to showcase themselves through technical sessions, small sided games and full field games.

Interested in getting on a Best XI list for a TopDrawerSoccer Combine? Check out how you can get seen at any of our 7 remaining Combines in 2014 here.

Kaylin Williams Mosier - Futura FC – Goalkeeper - 2015- Kaylin is a good all around keeper. She has great footwork that allows her to move across the goal quickly. Not the tallest of keepers, she got to some good high shots on the day and showed solid hands. 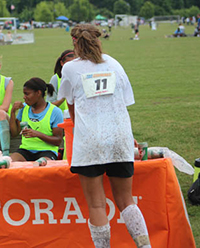 Tehgan Anguilm – Concorde Fire SC – Defender – 2016 – Tehgan plays as a forward or midfielder for club but spent most of the day at center back and never looked out of place. She oozes confidence with the ball at her feet, and was rarely beaten. Tehgan reads the game well, and plays simple out of the back. With a mix of her technical ability, soccer IQ and athletic ability Tehgan has a lot of potential.

Jordan Richmond – Birmingham United SA – Defender – 2017 – Richmond is a strong natural defender whose aggression is contagious. Her speed allows her to break out of the back and she whipped in some great left footed crosses on the day.

Megan Katona – Texas Rush – Defender – 2016 – Megan is an all around solid player, and like the other defenders in the best XI, she is extremely composed both on and off the ball. Her timing of tackles and reading of the game set her apart on the day. One of the most vocal at the back, she stepped forward to show leadership.

Karley Baker – Southern Soccer Academy – Midfielder – 2017 - Karley was a hot favorite amongst the college coaches attending the combine. She spent the majority of the day in central midfield finding pockets of space and showing a lot of composure in her distribution. When playing at center back, she communicated and directed well.

Christine Hoynack – Pinecrest Premier – Midfielder – 2015 – Hoynack has everything you would want from a central midfielder. Strong composed and executes well under pressure, nothing fazed her during the day. The quality of her first touch allowed her to play out of pressure quickly and confidently.

Lauren Chang – Tophat SC – Midfielder – 2017 – Lauren dominated the midfield in every game. She is a player with the ability to control the tempo of the game. She had moments on the dribble where is was able to penetrate at speed, moments where she slowed the game down with simple intricate passes and at times spread the field with a 40 yard cross field ball. A lefty who glides across the field and is exciting to watch, she led her team throughout the day.

Kimberly May – Concorde Fire SC – Midfield – 2017 – May has a fantastic first touch and is technically sound. She showed maturity beyond her years in her decision making especially under pressure. She has the ability to break out from the midfield and arrive late for shots in and around the box.

Elizabeth Mayfield – North Atlanta Soccer Association – Forward – 2018 – Lizzie was the stand out forward from the day looking the liveliest in front of goal. Always sniffing out chances and showing great awareness she managed to create opportunities for herself, and now needs to find that clinical edge. Lizzie is a multi-dimensional forward and was able to bring other players into the game, slotting through some good balls when dropping off deep.

Madison Cobb – Birmingham United SA – Forward – 2017 – Madison is a power house athlete who is built well to impact the game physically. Selfish in front of goal is what every coach wants from there forwards and Madison does not disappoint.