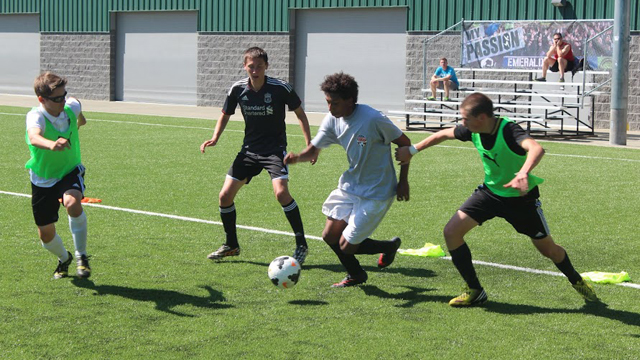 At the beautiful Starfire Complex, the first ever TDS Seattle Combine showcased the Pacific Northwest’s finest. Scouts on hand to assess talent included coaches from the University of Portland, Gonzaga, Seattle University, Western Washington among others.

With over 80 TDS Combine alumni now committed to play in college, the program is proving to pay dividends for many young players. Interested in getting on a National Guard Best XI list from a TopDrawerSoccer Combine? Check out how you can get seen at any of our three remaining Combines in 2014 here.

The following are the boys who stood out most in Seattle.

Erik Nunn – Atletico Santa Rosa - Goalkeeper (2015) – Making the trek from northern California, Nunn proved that Atletico Santa Rosa develop more than just field players. With the physical size and foundation Nunn has, all signs point to him being able to compete at many D1 programs next year.

Ahmon Afenegus – Portland Timbers – Defender (2015) – Afenegus is a natural left back prospect who loves to get forward. Excels in the final third, and has a good first touch that sets him up to play immediately. Good engine to him and gets up and down the left flank consistently.

Preston Green – Washington Premier – Defender (2018) – Despite being one of the youngest players at the combine, Green’s overall technical skill and decision making allowed him to stand out. Great on the ball, which allows him to play out of the back with ease, varying long diagonal switches with short simple passes.

Brendan Shaw – Vancouver Whitecaps – Defender/Midfielder (2015) – Shaw is a solid passer and really excelled in the small sided and full field games on the day. Moves well off the ball and will win his fair share of headers.

Aric Mayer – Washington Premier – Midfielder (2015) – Mayer really stood out in the full field games. Solid athletically, but also has the technical foundation to progress in his soccer career. Plays simple and quick, and has good mobility. Decision making under pressure was strong all day.

Sebastian Navarro – Crossfire Premier – Midfielder (2015)  - Navarro was quite possibly the best player at the combine. Works incredibly hard to win the ball back, and reads passing lanes very well. Disruptive defensively, and has the technique to complete a variety of passes on offense.

Brennan Weber – Eastside Timbers – Midfielder (2015) – A physically fit two-way midfielder who has a knack for goal. Passes well and has a good first touch.

Kameron Carey – Washington Premier – Midfielder (2017)  - Carey has skills that may translate well to that of a winger at the college level. Comfortable taking players on 1 v 1 and has a great burst of speed when dribbling at players. Calm under pressure, and put in some excellent crosses into the box.

Jose Castillo – Crossfire Premier – Forward (2015) – Castillo is a solid technical player who has the ability to get out of tight spaces easily. Combines well in the final third, and is a good finisher in front of goal.

Nick Iregui – Washington Premier – Forward (2017) – Stood out in the full field games. Focused player who is a hard worker and has a real understanding for the game and his role within it. Solid technique and good finisher in front of goal.

Lucas Rojen - Coquitlam Soccer Club – Forward (2015) – Rojen is a player that is solid in all aspects of the game. Strikes the ball very well, and is a natural goal scorer. Has a very good foundation and his decision making in the final third has improved leaps and bounds as he has continued in his development.