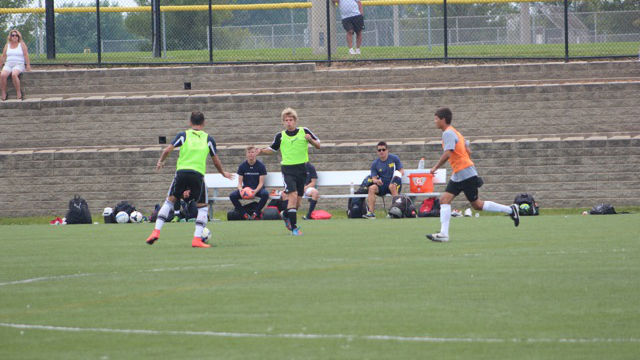 The second annual TDS Chicago Combine managed to avoid the previous year’s torrential downpour, and allowed plenty of midfielders and goalkeepers in particular to shine. Choosing the best fivee midfielders and best goalkeeper proved incredibly difficult. Heavy through the midfield, it’s safe to say this assortment of players would dominate possession against most competition.

Scouts on hand to help TDS identify and assess talent included coaches from University of Wisconsin, University of Michigan, Saint Xavier, Concordia, North Central, and many others.

With over 80 TDS Combine alumni now committed to play in College, the program is proving to pay dividends for many young players.

Interested in getting on a National Guard Best XI list from a TopDrawerSoccer Combine? Check out how you can get seen at any of our 3 remaining Combines in 2014 here.

The following are the boys who stood amongst a very talented player pool in Chicago.

Connor Openlander – St. Louis Scott Gallagher – Goalkeeper (2015) – Openlander was a cut above the rest throughout the day. One coach described him as having the talent to compete at “a very high level collegiate program.” His footwork is excellent, and distribution out of the back is an asset.

Brock Sullivan – Minnesota Thunder Academy – Defender (2016) – An attacking outside back, Sullivan gets up and down the flank consistently. Puts in good crosses, and makes good decisions on the ball. Can overlap and get forward when required.

Matt Solem – Chicago Magic PSG – Defender (2018) – The young defender managed to do a few things that flashed his long term potential. A quick flip of the hips here, a crunching tackle there, and voilà. He reads the game well, and has a good mentality about him for a young center back. Definitely one to track.

Grant Yu – Continental FC Delco – Midfielder (2016) – Yu is an incredibly smart soccer player. Keeps it so simple and effective in the buildup, and closes down really well defensively. Great two-way player who looks to have an excellent career ahead of him as a central midfielder. Will have a lot of options to play at the next level.

Connor Alba – SC Waukesha – Midfielder (2016) - One of the first things noticed about the Marquette commit is how easy the technical side of the game comes to him. Has a good burst of speed from midfield that allows him to get forward centrally and combine with strikers.

Jesus Perez – Chicago Magic PSG – Midfielder (2016) – Perez has improved leaps and bounds since the first TDS Chicago Combine. His first touch is effortless, and his comfort on the ball is quickly noticeable. Loves to create from a deep lying position, and has a wide range of passes that he’s capable of. Scored a Pirlo esque chip from the penalty spot that was fantastic.

Marc Ybarra – Crew Soccer Academy Wolves – Midfielder (2017) – Ybarra does very well under pressure. Decision making on the ball is good, and he quite simply makes his teammates better. Great potential for him to develop into a solid two-way college player.

Jaime Colin – FC Wisconsin Nationals – Midfielder (2015) – Colin’s another midfielder that can really knock the ball. Very confidently moves it from side to side and forward, and wants the buildup to run through him. Has a very quick first few steps, and was one of the best players at the combine. Has a good sense for the game, and his first touch is very sharp.

Luis Arreola – FC Athletico – Forward (2017) – The U15 BNT forward is tailor made for the target striker position. Great hold up play, and is comfortable playing with his back to the goal. Rises very well for headers and attacks them with good form. Good finisher around the area, and does well to strike the ball cleanly.

Jacob Rosen – Vardar – Forward/Winger (2015) – Rosen is very dangerous taking players on 1 v 1. Confident attacker who really likes to dribble at players and try to get his cross in. Can also play in the midfield as a wide midfielder.