TDS’ second Combine at the University of Texas at Dallas showcased over 100 of the top players from the Texas area.  Players participated in technical and tactical sessions, as well as small-sided and full-field games under the watchful eyes of top college coaches.

The best boys XI from the Combine include representation from many of the region’s top players and clubs, with the Dallas Texans and Lonestar SC providing many of the top players. 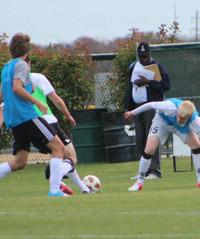 Chase Therrien – Solar Chelsea – Goalkeeper (2015) – Lauded for his excellent hands and communication skills out of the back, Chase displayed his ability to stop difficult shots throughout the day.  Chase is a confident young keeper who organizes his back line very effectively for his age.

Simmule Turner – Dallas Texans – Left Back (2013) – Pacey outside back that is equally comfortable defending as he is joining the attack.  Excels at taking players on and delivering crosses into the box.  Very fit player who communicates frequently to teammates.

Michael Brezovsky – Dallas Texans – Center Back (2014) – Physically imposing defender who has a good touch.  Calm on the ball for a player his size, and does well in tackles.  Good ball winner.

Josh Ianno – Georgetown Force FC – Center Back (2013) - Solid defender, who is as quick as he is versatile.  Can probably play a variety of positions across the back line.

Damion Passos – Solar Chelsea – Right Back (2014) – Good outside back who gets forward often.  Really excelled during the full field games at the Combine.

Sean Medellin – Lonestar SC – Defender/Midfielder (2014) – One of the best players at the combine because of his rare blend of skill and size.  His movement off the ball and communication were superb, and has a solid future ahead of him at the next level.

Collin Smith – Texans SC Houston – Midfielder (2014) – Rated as a must player to have on any team, Collin has a great work rate and is capable of building the attack from all positions.  Also shows a great ability to execute and make good decisions under pressure in tight spaces.

Matthew Dorsey – Houston Dynamo – Midfielder (2014) – The state of Texas’ 5th rated 2014 prospect did not disappoint.  Dorsey is a very complete player that impressed scouts and coaches because of his soccer intelligence and technique.  Box to box central midfielder that excels at breaking up attacks and building up possession on offense.  Great in the air and in the tackle, Dorsey has a wonderful future ahead of him either with a top college program, or as a potential home grown player for the Houston Dynamo.

Sean Grace – Dallas Texans – Midfielder (2015) – Another Texans product that showed well, Grace impressed because of his 1 v 1 ability and decision making under pressure.  Reads the game well, and is a great passer of the ball.

Fernando Mercado – Lonestar SC – Forward (2013) – Mercado exploded out of the gates, and was the most technical player at the combine.  He displayed a willingness to take players on off the dribble, and showed his quickness and speed during the full field game.  Very creative player who possesses a wonderful soccer IQ.