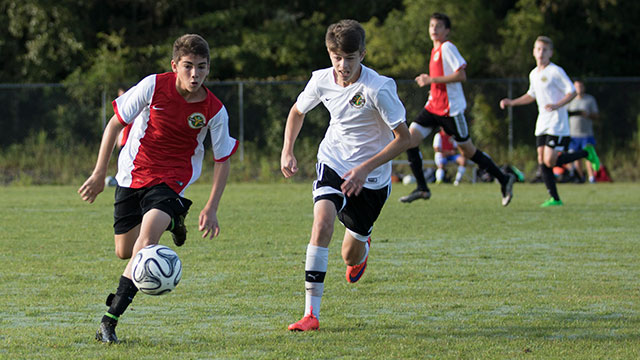 This year our TDS Combine series partnered with Super Y’s Regional Scouting Series to provide a combine for all players selected. We visited Region I, II and III on Saturday August 15th where talent was in abundance and flocks of college coaches in attendance.

Here is the Boys Best XI from Region III:

GK Trey Blackshear – Balckshear had safe hands, quick feet and made some important saves to keep his team in the game during 11v11 portion of the day.

D Marquis Carter – Carter is physically all you would want from a defender, fast and strong, he proved hard to beat throughout the day. His work ethic on and off the ball, and his exceptional 1v1 defending left him shining through the combine.

D Cale Torres – Torres is extremely athletic, plays well out of the back well and was a leader throughout the day. His communication was good at the back, and he made smart decisions on when to step. When beaten his athleticism let him recover well. Solid defender.

D Joshua Rodriguez – Rodriguez is a reliable and athletically gifted defender. He executed well under pressure and is technically solid. He was simple in possession and connected well out of the back.

M Pablo Vargas – Vargas was one of the most technically gifted players on the field. He has great vision, and has the ability to go past players like they aren’t even there. He delivered some good crosses, connected well and was always dangerous breaking from the midfield.

M Joe Estes – Estes is an all-round box-to-box midfielder. He won balls in the area, tracked back well, connected passes and pushed forward on the attack to create opportunities for himself and the team. His technical ability and high pass completion ratio set him apart from the rest.

M Jacob Huth – Huth was one of the younger players to participate but it didn’t show. He controlled the middle of the field in every game, sitting deep in the #6 role, picking up the pieces and the majority of the time playing simple passes to link the play. He does however possess a great range to his passing and sprayed a few cross field balls that were pin point! Huth is also tough in the tackle.

M Tanner Tessman – Much like Huth, Tessman dropped into the No. 6 role in midfield which works well for him. He can hit a great diagonal ball, and created a lot of chances for his team throughout the day. His height allows him to win a lot of balls in the air and he is strong on the ball and technically solid.

F Chase Hester – Hester is a talented forward, who chases down everything up top. He is an old fashioned #9, who sits as the highest forward. Great in the air, dangerous with the ball at his feet, he is always looking to get a bite at goal. A natural born goal scorer, he created chance after chance for himself.

F Kameron Lacey – Lacey is a forward that likes to drag himself out wide into the space to pick up the ball. Technically good, his speed allows him to penetrate from the wings on the dribble. He created shooting opportunities for himself this way and also slotted some nice through balls.

F Damian Miranda – Miranda is a versatile player, who is effective as a forward and in the midfield. A hustler off the ball, he is quick to close down and force errors. In tight spaces he was able to showcase his top technical ability, strength and speed to find ways out and create opportunities.