The TDS Philadelphia Combine 2013 featured a strong and dynamic group of girls from clubs stretching all along the East Coast. College coaches and scouts from Division I, Division II and Division III programs evaluated players during technical sessions, small-sided, and full field games.

Making it into our 2013 Girls Best XI are players from top teams such as FC Bucks, Penn Fusion and Continental FC DELCO. 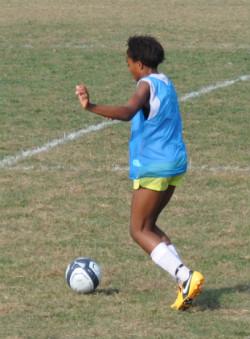 GK Hailey Parks, FC Pocono, 2014: Parks had a fantastic combine scoring mostly 5s and 4s on her evaluation. Her physical ability and organization set her apart. She impressed the coaches with a couple of agile saves and great distribution.

D Angelique Chatpar, Albertson SC, 2015: Strong and quick at the back, Chatpar was a force to be reckoned with. She showed great decision making on when to step and when to hold. When she did fly into a tackle she looked confident and self-assured, almost Puyol-esque.

D Jaylyn Thompson, Penn Fusion, 2016: Thompson is ranked No. 38 nationally and ranked No. 2 in PA and she did not disappoint. Solid at the back, Thompson looked wise beyond her years – reading the game well, distributing simply and showing great leadership. Not only a great ball winner, but comfortable in possession rarely giving the ball up.

D Josie Schultz, Continental FC Delco, 2016: Schulte is a hardworking, versatile defender who is great in the air. She impressed the coaches with her discipline at the back.

D Vashti Williams, Winslow SC, 2016: William’s athletic ability and potential was clear to see at the back. Her work ethic throughout the day was second to none, and she closed the space very well. Great in the air, strong and quick, Williams has all the attributes of a DI defender.

M Krista Hinchman, FC Europa, 2015: Hinchman is a simple, hardworking, technical midfielder. Rarely losing possession, she kept the game flowing and switched the play well. Her decision making, technical ability and execution put her head and shoulders above the rest. Defensively she pressured well and kept the midfield moving as a unit.

M Sidonie Warnecker, Penn Fusion, 2016: Warnecker is another one of our top 11 players from the combine who also sits in our PA rankings at No. 15. Scoring very highly in all categories, a mobile athlete with not only great technical abilities but tactically sound too. She read the game well, and picked the right moments to break out from the midfield.

M Alexa Beatty, Penn Fusion, 2016: Only a sophomore, Beatty showed great distribution with both feet throughout the day. Beatty stood out as one of the best crossers of the ball out of the girls, whipping in some mean balls toward the end of the day. She also kept things simple when needed, and went on a few mazing runs.

M Aimee Manley, FC Bucks, 2015: Manley is a solid, well-balanced midfielder. She communicated well in midfield, helping keep the middle of the park well organized. She showed great fitness throughout the games, and was great in the air.

F Sydney Jones, FC Bucks, 2016: Jones played consistently well throughout the full-sided games. She impressed the coaches with her tight footwork, decision making and attacking runs. She showed the ability to play as a point striker and drop in the No. 10 roll and looked comfortable in both.

F Tziarra King, Winslow SC, 2016: King is a great athlete quick, strong and agile. She is technically sound, reads the game well and has a great eye for goal, creating chances out of nothing. King worked hard for the team off the ball making lots of runs to create space, and linked up well with her midfield. King has all the attributes to be an effective forward at DI level.