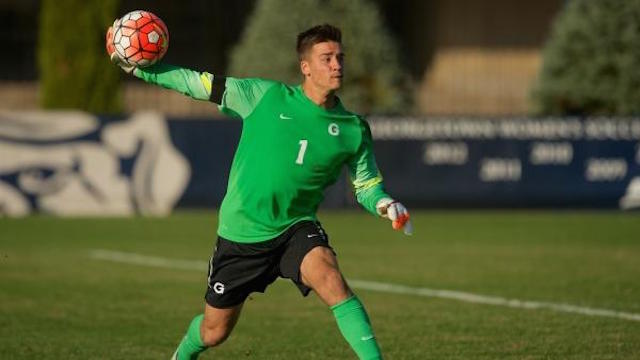 The Andrew Carleton news rippled through the world of MLS Homegrowns like a series of waves cresting and breaking on the shore. Carleton is one of the brightest American attacking players, and Atlanta United snapped him up on June 9, weeks before his 16th birthday.

Less than a week later, D.C United made some history of its own. The capital club signed U17 MNT captain Chris Durkin to a Homegrown contract at 16, the youngest player in history to sign for D.C. United and the fifth-youngest Homegrown in MLS history. A day later, Durkin excelled for D.C. United in a cup match, completing 38 of his 45 passes and 24 completed in the attacking half.

If you sense a trend here, you are not beside yourself. There is one, and it is youth.

Durkin and Carleton are still outliers in an American landscape historically skeptical about signing teenagers, let alone 16-year olds. That is changing, and both signings six days apart are significant for that reason. MLS clubs are learning, and that’s very good news for the architecture of the league’s youth.

With that said, there are more moveable feasts to be had in the world of the MLS Homegrown. Here are five young players eligible for Homegrown deals patiently biding their time before they are deservedly handed contracts.

There’s no way around the fact that the Timbers academy has struggled mightily to get off the ground. The Timbers have only signed two of their own Homegrowns, and both Steven Evans and Brent Richards weren’t long for MLS. In fact, they combined for only six first team appearances, and no MLS team has a worse record with its own academy players in the pro ranks. Rubio Rubin’s early departure from the area never hurt more.

Adrian Villegas might not be a salve to those wounds in and of himself, but he can go a long way toward fixing some of the perception that the Timbers aren’t producing pro-ready talent. Villegas was probably the best American player for the U17 MNT at the Nike Friendlies in December, and the Hood River, Ore. native has been with the residency program all spring. A born distributor, Villegas is a nuisance on possession and is nearly impossible to knock off the ball when he’s in form. Combined with his vision and natural athleticism in the middle, the Timbers would be foolish not to tender a Homegrown offer, and fast. He’s one to build around.

This one is perhaps a bit early, but it’s never too soon to lock up your best players. The Galaxy would seem to understand the concept better than most. Goalkeeper Eric Lopez, the No. 4 recruit in the 2017 class, signed for Galaxy II at the tender age of 15 in 2014. When your profile is as high as the Galaxy’s academy, you can’t afford to mess around with young players. If you wait, there’s a good chance poacher clubs like Tijuana will be right outside the door with a contract in hand. It’s certainly happened before. See: Paul Arriola.

Alvarez only turns 14 this month, but the fact that he’s been playing up with the Galaxy U16s this year (and scoring manic golazos) makes him one of the most prized players in the entire academy. Alvarez possesses that rare blend of on-ball technical ability and agility in a phone booth that’d make Juan Mata proud. The good news at this stage in his career is that his position malleable. Whether as a second forward or a driving attacking midfielder, Alvarez is still at the point where he can be shaped. That said, there hasn’t been a prospect to come through the Galaxy’s academy ranks with this much potential in a long time (maybe ever), so it’s vital the Galaxy don’t wait too long to pull him into the fray.

Orlando City isn’t shy about lobbing contracts (and playing time) at young players. After all, the club handed a 19-year-old Bryan Rochez a young DP contract last year. And even though its academy is hardly the oldest on the block, they’ve already turned an eye toward its ranks. Longtime U.S. YNT attacking stalwart Pierre Da Silva was signed to Orlando City B for its inaugural season this year, signaling real intent on the part of Orlando City to foster its youth.

Adamolekun is almost certainly next. The Jamaican international’s spent the last few years in Orlando ripping up DA back lines, and he enters this summer’s DA Playoffs with an unreal return of 18 goals in 29 games, one of the top outputs for any U18 forward in the country. Adamolekun is a lanky speedster with a lethal touch in the box, and he would seem earmarked for at least USL minutes, if not an out-and-out pro Homegrown deal. He’s played well in recent CONCACAF U17 competition, and he’ll no doubt be in the mix for future Jamaican national team minutes. Best to snap him up before someone else does.

The Toronto FC academy is often shrouded from wider American view. Since it doesn’t compete in the Development Academy, it only emerges for showcase and international events, and the soft truth is that Canadian academies just tend to penetrate the market less below the border line. Which is a shame because all three Canadian MLS academies are pushing boundaries in their own way. For Toronto FC, that means a multi-million dollar training complex and facilities it shares with the first team.

Akinola has benefitted more than most. There are a number of ballyhooed prospects in TFC’s academy, but none of them have more promise than Akinola. Gallingly for Canada, Akinola was born in Canada but has American citizenship, and U.S. Soccer didn’t rest on its haunches. The No. 7 player in the 2018 class was first called in to a U14 BNT camp in 2014, and he had his breakout on April 27, 2015 when he put four goals past Croatia for the U15 BNT. Ever since, he’s been intimately involved in the U.S. setup, and he’s likely to get a long look for the U17 World Cup next year. This is all decidedly good news for TFC, which has a center forward playing at a high level for both club and country. A diminutive 5-foot-7 back-to-goal threat who can also turn and burn, Akinola fills a unique niche in the country’s growing repertoire of quality center forwards.

The Quakes haven’t done much in the way of Homegrowns, and they haven’t given a consistent chance to the one they’ve signed. Since founding their academy, Tommy Thompson is their only HG signing, and he’s largely been shunned to bench minutes or loan spells with Sacramento Republic. He’s never reached 700 minutes in a season, and his style doesn’t suit San Jose’s brutish, direct approach. Stanford‘s Amir Bashti is probably the team’s best outfield HG prospect, which is perhaps a small reason to worry since he’s also a slight attacking mid.

J.T. Marcinkowski shares none of those worries. He’s probably the best unsigned American keeper in the country now that Zack Steffen and Ethan Horvath are both pros. Further, his U.S. YNT playing time only figures to increase as he becomes the likely choice to man the posts for the U20 World Cup next year. For now, he enters his sophomore year at Georgetown as the country’s best college keeper and San Jose’s best overall Homegrown prospect. Quick off his line and devastatingly fast from post to post, Marcinkowski has largely followed the Nick Rimando track. As a 6-foot-1 keeper still growing into his frame, Marcinkowski is among the best reflex keepers the U.S. YNT has seen in recent years. San Jose might let him marinate in the college ranks for now - keepers tend to buck the trend and actually get better in college soccer - but hopefully they don’t wait long. It’s only a matter of time before Europe calls.