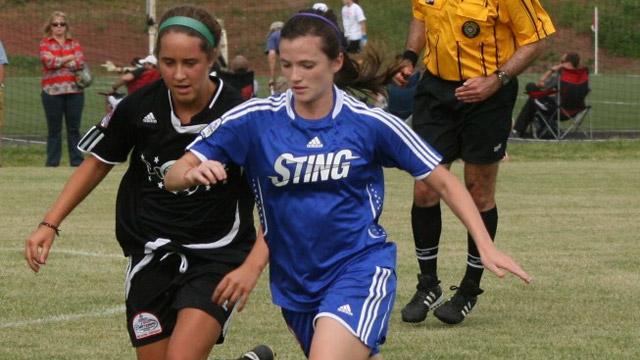 MURFREESBORO, Tenn. (June 18, 2011) – The US Youth Soccer Region III Championships continued on a day of storms and sun today at the Richard Siegel Soccer Park in Murfreesboro, Tenn. Early morning thunder added drama to the event as players competed in day two of preliminary games, setting themselves up for a possible quarterfinal berth. More than 100 college coaches have taken in games at the Region Championships, scouting some of the top talent in the area. After today’s weather issues caused a four hour delay in games, tomorrow’s matches will follow true to schedule, beginning at 8 a.m. CT and continuing throughout the day with the final matches beginning at 8 p.m.

Before the storms rolled in, the Dallas Texans Red 96 (TX-N) scored a pair of goals in each half to come away with a 4-3 victory over Vestavia Steamers 96 Black of Alabama. After after falling behind in the first half, Vestavia player Nathanael Dauphin punched in three consecutive goals to give his team a 3-2 in the sixtieth minute. But it wasn’t enough as the Dallas Texans scored in twice in six minutes to reclaim the lead and secure the victory.

Despite numerous scoring chances in the game, CESA 95 Premier (SC) and NYSA Celtic 96 Green (OK) played to a 0-0 draw. The first half was evenly matched, but in the second half CESA created the better opportunities. Some unlucky bounces, the goal posts and the crossbar kept CESA from netting a goal and earning three points.

Hometown team Brentwood 96 Premier (TN) scored late in the second half to draw 1-1 with GSA 96 Phoenix Red (GA). GSA scored in stoppage time in the first half to claim the 1-0 lead. Instead of hanging their heads, the Brentwood 96 Premier players continued to fight and scored in the seventy-fourth minute against the run of play. Brentwood now sits atop its pool going into the final day of preliminary games.

Mississippi Chicago Fire Juniors 96 Premier (MS) scored two first-half goals against IMG Soccer Academy (FL) to take a 2-0 lead into half-time. Gregory Nickles opened the scoring with a goal in the fourteenth minute. Joshua Stowers doubled the Mississippi Fire lead with a goal in the thirty-third minute. If the first half belonged to Fire, the second half belonged to IMG, who scored two goals of its own in the last 15 minutes of play to steal a 2-2 draw.
After waiting through a weather delay, the U-16 Girls took the field Saturday afternoon. NWA Lightning Strikers (AR) proved that lightning can strike twice, scoring two goals on their way to a 2-0 victory over Mississippi Chicago Fire Juniors 95G Premier (MS).

GSA 95 Phoenix Red (GA) followed up a big win on day one with a win over Gulf Coast United Futbol Club (MS). Rachel Garcia opened the scoring in tenth minute and Lauren Tanner added two second half goals to lead GSA. Tanner is now the top scorer in the age group with five goals in two days.
Concorde Fire South Elite (GA) got out to an early lead over FC Alliance 95G Black (TN) when Savannah Jordan scored in the fourteenth minute. FC Alliance leveled with a forty-second minute goal by Summer Lanter. Twenty minutes later, Allison Wetherington put away the game winner for Concorde Fire in the sixty-third minute.

Defending National Champion Sting 95 (TX-N) won their second game in as many days with a 2-0 victory over BUSA 95 ECNL (AL) on Saturday. Morgan Williams scored a first half goal and Britt Blackwell added one in the second half to place Sting 95 at the top of its pool going into the last day of preliminary games.