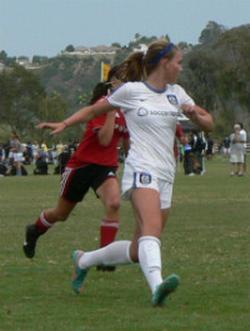 A dangerous forward with a powerful left foot, Jennifer Westendorf made it a dream come true with her recent commitment to the Fighting Irish program.

“Notre Dame has been my dream school since I was about 6, but I never thought it would actually be the college I would attend,” she told TopDrawerSoccer.com. “When I went on my first visit I literally fell in love with everything about it. I couldn't find a single thing I didn't like. The second visit was to finally commit and enjoy a football game.”

Head coach Randy Waldrum has certainly built a national power at Notre Dame, making it no surprise to see the team land a player of Westendorf’s caliber. And part of what drew her to the team was its spirit.

“I loved the team chemistry,” she said. “They all had each other's backs and could joke around and play, but when it came to the games and practices they were serious. It reminded me of my club team a lot. The team plays at such a high level and I can't imagine someone not wanting that.”

She also had high praise for the university.

“I loved the family environment that the school had,” she said. “Everyone I met that went there loved it and would not choose anywhere else if given the opportunity. A student described it to me as Disney World, everyone was always smiling and happy to be there.”

Making the on-campus visit is a huge part of the recruiting process, and for Camille Bassett, it certainly played a massive role in her commitment to Central Arkansas.

“As soon as my mom and I arrived on the University of Central Arkansas campus to walk around for about ten minutes, every single person we saw either smiled and waved or said hello to us,” Bassett told TopDrawerSoccer.com. “The campus is so beautiful with many green trees and brick red buildings; it’s nothing like home in California.”

Along with the friendly people on campus, Bassett noted the soccer house also prodded her in that direction.

“This actual house gave the soccer girls a place to stay, come hang out, make some food in the kitchen if they’d like, or study for classes,” she said. “Their locker room was also there, where they would get ready and go right out the back of the house onto the beautiful practice field. The teammates welcomed me right away, exclaiming how much they love it at University of Central Arkansas, and saying they hope I join them. I was immediately invited to go to the football game and just spend time with them, and I already felt so happily welcomed into their family.”

Bassett also liked the community support of UCA, the school spirit on display during her visit, and the kind of major she intends to pursue.

“Academically, UCA had my intended major of Broadcast Journalism as well, and it was a great communications department that I was able to tour,” she said.

Midfielder Peyton Reisch (Virginia Rush) committed to Central Arkansas for the class of 2014.

Defender Katherine Day (Seacoast United) committed to Providence for the class of 2015.

Defender Atupele Mshana (Dallas Texans) committed to Texas for the class of 2016.