Based on the odds, Alex Kapp seemed to be leaning toward the Big East when we spoke with him about his college options last month.

But an unofficial visit to Boston College was enough to upstage the competition for his goalkeeping services. Kapp, the No. 66 player in our 2012 Top 100 and the starting netminder for Westchester Academy, recently made his verbal commitment with the Golden Eagles.

“After meeting with coach (Ed Kelly) and spending time with the team, I knew it would be a good fit,” Kapp said. “Being able to have my family and friends from New York see me play was a reason to choose BC. It’s a soccer program that can help me get to the next level.” 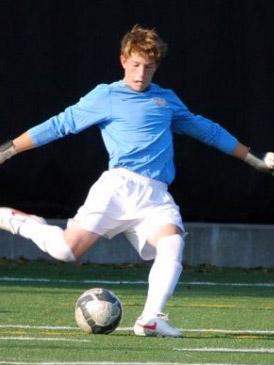 Alex Kapp
Kapp is one of two Top 100 players to be featured in this weeks’ boys’ commitment update. The other, is Morgan Smith of Black Watch Premier in New York.

Smith is our No. 98 on the 2012 Top 100, and has chosen to make his verbal commitment with Syracuse. The decision keeps him local and beats out his other top choices which included Duke, Harvard and Saint Louis.

“I chose Syracuse because they are close enough to home and offer a great opportunity to be a part of a rebuilding program,” Smith said. “I really liked the coaches, the facilities are amazing and the Big East offers some great soccer.”

Now, for the rest of the roundup:

Preston Gayton (Concorde Fire) has verbally committed to Clemson for the 2012 season.

Peter Scimemi (Cosmos Academy East) has signed with Fairleigh-Dickinson(m) for the 2011 season.

Midfielder Tyler Wagley (Solar SC) has signed with Eastern New Mexico. Wagley has a served as a team captain and dependable contributor for his squad.

Dan Traxler (DC United) has signed to South Carolina. Traxler is a starting defender on the DC United squad.

Steven Shirokikh (Met Oval) has signed with Binghamton. Shirokikh is a highly skilled and intelligent goalkeeper who has international experience having trained abroad. He was born in the Ukraine and speaks three languages.