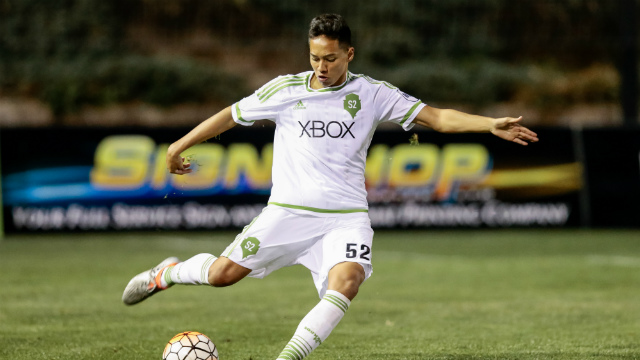 On the eve of the 2017 USL season, the cacophony of teams around the country are preparing to gear up for another slog in the lower division of North American soccer.

For independent clubs, chasing championships and wins are the overarching goal of competing in the USL, while for MLS-run teams – New York Red Bulls II notwithstanding – giving young players a run out serves as the primary benefit of participating.

That creates two spectrums through which to view the USL. The entertaining, wow-factor sides seeking to put butts in seats (Sacramento, Oklahoma City, Phoenix, Cincinnati, Louisville, etc.) and the development squads featuring mostly young, academy players seeking to make a jump to the next level.

On the eve of the 2017, which teams will provide the most compelling viewing from the development angle? Here is the top five, judged from the perspective of academy players getting promoted on amateur deals, past approaches and current roster.

A day before the season starts, Vancouver has no players listed on its roster older than 25, and recently added 16-year-old Michael Baldisimo from the academy. Vancouver’s willingness to use its academy pipeline, even as amateurs, adds to the collection of young talent. The roster is impressive too, between rising star Kadin Chung, former PDL star Dominick Zator, Matthew Baldisimo, Terran Campbell and MLS draft pick Francis de Vries.

The blend at Orlando City B should continue the success for Lions’ reserves, both from a results perspective and development angle. The team is captained by 35-year-old Lewis Neal, providing an experienced head for the collection of young talent around him. Defender Leonardo Perreira brings Brazilian youth national team experience to Orlando, while former U.S. U17 MNT forward Joe Gallardo is expected to feature. OCB doesn’t skew as younger as some of its other counterparts, though that’s not to say the likes of Zach Carroll, Paul Clowes, Jordan Schweizter and Ben Polk won’t be able to put together some exciting moments. Sprinkle in any first team loans (potentially Richie Laryea again) and academy players like Landen Haig and Raul Aguilera, and tuning into Orlando City B at its new stadium will provide a nice viewing experience.

In just a few years, the Union is starting to reap the benefits of having a place for young talent to get minutes. Midfielder Derrick Jones jumped straight into the first team at the start of the MLS season after spending the entire 2016 campaign with the Steel. Adam Najem should see time with the Steel this fall after joining Philadelphia, while academy players like Justin McMaster, Mark McKenzie, Josue Monge and Issa Rayyan are all almost certain to see minutes. Beyond that, the Steel has added former Syracuse standout Chris Nanco to an attack that will also feature Eric Ayuk and academy signee Yosef Samuel.

After a bumpy start to S2, there is a clear trend emerging, with the focus shifting towards development and moving players along to the Sounders MLS side. The oldest player on the roster (which is admittedly sparse) is 23, and if recent trends continue this season, several Seattle Academy players will suit up for the team throughout the season. One of the team’s recent signings is quickly emerging as a top prospect, as forward Shandon Houpeau agreed to pro terms earlier this week. His exploits in front of goal should be closely monitored. What also makes S2 exciting is the academy youngsters that will be in competition for match day spots: starting with goalkeeper Trey Muse and left back Jake Morris, Villanova recruit Samuel Rogers and youngster Azriel Gonzalez, S2 should provide minutes for several players from its youth ranks.

Forget the crowd support in Portland that turns USL matches into more watchable fare on a live stream. The players on the Timbers 2 roster blend a mix of exciting domestic and international talent still yet to reach their prime. Former U.S. youth international Villyan Bijev led the league in assists a year ago; with another big year, he’ll certainly get a chance to climb the ladder either in Portland or elsewhere. Blake Bodily is possibly the team’s prize academy prospect at the moment, and he’ll be starting for T2 before potentially heading off to college in the fall. That’s just the tip of the iceberg as well. T2 also added Harold Hanson, an athletic right back, from the club ranks, and UC Santa Barbara defender Lamar Batista. The duo joins holdovers from last year’s roster, including Augustine Williams, Andre Lewis and Dylan Damraoui. That's all without mentioning the promising out-of-market talent the Timbers have recruited to its academy, including mifielder Jacob Montes and forward Lucas Cini.