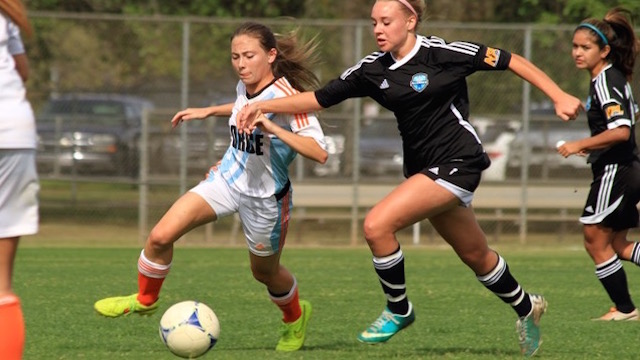 Fresh off the announcement that U.S. Soccer is starting up a competitor to the ECNL in 2017, the league is marching forward with its 2015-16 season like it always has. That means teams are slowly but surely marching toward June’s playoff season.

While early lightning strikes presage the coming storm in the battle for the country’s top girls players, the show must go on.

To that end, we look at a handful of the nation’s most exciting teams in the ECNL so far this season today. We’ll grab one from each age group - U14-U18 - and extoll their virtues. Keep in mind our record-keeping is contingent on the ECNL’s, so our numbers are based on theirs. So let’s dive in.

Opponents more or less have to look at this FC Virginia’s team’s record through latticed fingers. In 11 reported games, the team hasn’t lost a single match, and in fact they’d given up just two goals over that span while pouring in 30. Not too shabby. Perhaps the most remarkable part about this team’s ascendance is that they didn’t do it with a single guiding superstar, which is the norm among rampant U14 teams in the ECNL. No fewer than 13 players have scored for this team, guided by six from midfielder Natalie Wilson. With the assists provided by Alexis Theoret and a staunch defense, this squad will be a hard one to take down this summer.

On most teams you might expect the strikers, or maybe even a skillful midfielder, to be the star. But here, the defense is the key, and that starts with center back Brandi Peterson. One of the most athletic defenders in the ECNL, Peterson is the centerpiece for a back line that’s limited the opposition to just 14 goals in 17 games this season. Of course the attack (56 goals) is no joke, which is a major reason why the Fire easily lead the Southeast Conference and haven’t lost a game yet this season with a 13-0-4 mark. But as we know, defense guides teams to titles, and on that score you couldn’t find a U15 “outsider” more poised to surprise everyone with a run to the ECNL Finals this summer.

Any team that can supplant Dallas Sting’s recent hegemony in the Texas Conference is worth mentioning, and it would appear Solar Chelsea’s U16s are on their way to doing just that. To be sure, this team’s record is worth touting, as is its past successes, but one look at this roster is enough to concede that there are few in the ECNL that can match up with it pound-for-pound. For starters, Peyton Bauman might be the most electric goalkeeper in the league. Attackers Courtney Sebazco (5g, 12a) and leading scorer Catiana Lychywek (9g, 2a) have a natural connection up top. And that’s to say nothing of forward Messiah Bright, who has seven goals and six assists. High-flying doesn’t begin to cover it.

Arguably the loftiest age division in the ECNL, the U17s reached their zenith with the Force this year. The presumptive favorites to take home the national title before some of these players disperse to the top soccer colleges in the country, we’re certainly not sleeping on them. There have been few spines in the ECNL in recent years with this much top-to-bottom talent: Luca Deza, Kayla Fong, Samantha Tran, Alexandra Augulis and Tierna Davidson all belong in end-of-season Best XI conversations, and Davidson might be the most versatile center back/holding midfielder combo in the league’s recent memory. The scary part is this team has a handful of players playing up, and all look ready to take the baton.

You really think we weren’t going to choose Mallory Pugh’s side? It’s true that Pugh’s playing time has been drastically reduced thanks to national team duty, which she’ll halve between full national team play and the U20s, which she’ll captain into the World Cup later this year. But look elsewhere. In addition to the usual suspects, Kelcey Cavarra has been a pleasant surprise this season with three goals and five assists, yet another attacking weapon on a team overloaded with them. Of course there’s leading scorer Tatum Barton, midfield heartbeat Alyssa Kaiser and the talented goalkeeping duo of Brittany Wilson and Emily Griffith. But this is Pugh’s team, and if she isn’t off to UCLA early, this should also be a national title winner.