Weston FC’s Nicholas Pappacena knows how to find the back of the net. After all, he has been doing it since he was five years old.

The Columbia recruit scored 21 goals last year in the USSF’s Development Academy, which was among the tops in the nation. Through the first few months of this season, he is on pace to easily top that mark.

“For this season, I set out a goal for myself to score 21 goals or better since that's what I did last year in the U-16 age group, so I know if I do anything less I wouldn't be playing up to my full potential,” Pappacena told TopDrawerSoccer.com.

“However, with all the great players we have on our team, it's hard to score all the goals. It's not really my main priority to be the top goal scorer on my team, I just want to be able to help them in any way I can and if that means scoring goals, I'll try to keep putting the ball in the back of the net.”

With 12 goals in nine games, Pappacena has helped his Florida club to the top spot in the Southeast Division with a 7-1-1 record. On the individual level, Pappacena is leading the country’s elite boys club soccer league in goals scored.

“Every time I watch him play, I'm mesmerized at his ability to both be able to collect the ball and accelerate forward, as well as be able to finish flawlessly against the top keepers in the world. Whatever he does in games, I try to model in practice, yet my end result rarely turns out as well as his does.” 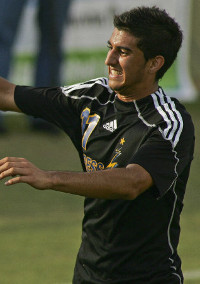 In the U16 age group, three players are tied for the top honor with FC Dallas’ Santiago Agudelo, D.C. United’s Gerson Umana, and Shattuck-Saint Mary’s Akeem Ward all sitting on nine goals.

“It’s really all team work,” Umana told TopDrawerSoccer.com. “I think as a team we are really complete [and] my coach is making me into a better player.”

The speedy winger said that his goal going into the season was to get to 10 goals in the first 10 games. He will need a goal on Saturday against Players Development Academy to reach the mark.

“My goal is to always show my best and score the most I can,” Umana said.

The D.C. United prospect says he looks up to Cristiano Ronaldo in terms of playing style.

Trailing the pack by a goal is Philadelphia Union prospect Doyla Tuvesson, who also gave a lot of credit to his teammates for his success.

“I have been getting a lot of good passes from my teammates inside the box and when the ball is in front of the net I try to stay relaxed and pick out corners with my shots,” Tuvesson told TopDrawerSoccer.com. “I basically just try to be composed, not do too much, and take early shots.”

The 16-year-old said he did not set any mark for how many goals he wanted to score in his first season as a full time player with FC Delco in the Development Academy.