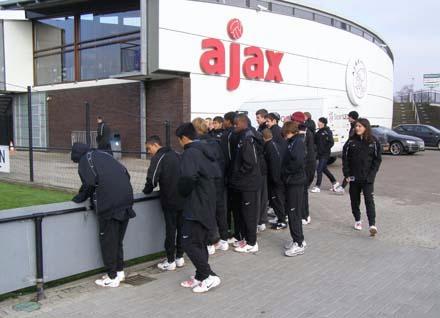 US Club Soccer’s id2 National Selection (1996-97) earned its second win in as many games Tuesday evening, a 3-2 defeat of Ajax C2 (Amsterdam).

“This afternoon’s game against Ajax was a great opportunity for the [players] as we knew it would be,” said Gerry McKeown, US Club Soccer's id2 Boys' Program Director and head coach of the id2 National Selection. “The result maybe could have been a little bit easier for us. During the end of the game they put a lot of pressure and took a lot of risks. Overall, it was pretty exciting for our boys to be able play and also beat a team like Ajax.” 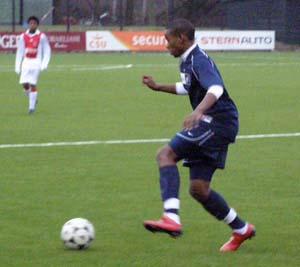 Ade Taiwo scored the game-winner.
Corey Baird (Escondido, Calif./San Diego Surf) gave the id2 National Selection a 1-0 lead at halftime with a goal in the 17th minute on an assist from Chet Castellaw (Hidden Hills, Calif./Real So Cal).

It did not take the id2 National Selection long to increase that lead once they came out of the locker room at halftime, as Wesley Wade (South Orange, N.J./New Jersey Rangers) ran onto a ball from Collin Fernandez (Downers Grove, Ill./Chicago Fire Juniors) and tucked the ball away for a 2-0 lead just three minutes into the second half.

Ade Taiwo (Raleigh, N.C./Triangle FC) added what proved to be the game-winning goal in the 61st minute on assists from Baird and Benny Swanson (Grove City, Ohio/Team Ohio FC).

Ajax stormed back and added goals in the 62nd and 67th minutes, putting the id2 National Selection under heavy pressure, but the final whistle blew to secure the win for the Americans.

Wade and Taiwo have scored in each of id2 National Selection's first two games.

The squad ate both a pre-game meal and post-game dinner in the Ajax clubhouse, experiencing the complete European soccer experience on and off the field.

After a Wednesday morning regeneration session, the squad will return to Amsterdam for a tour of Amsterdam ArenA and the city.

The id2 National Selection travels to PSV Eindhoven on Thurs. for its third of four games on the trip.
Related: Players To Watch,