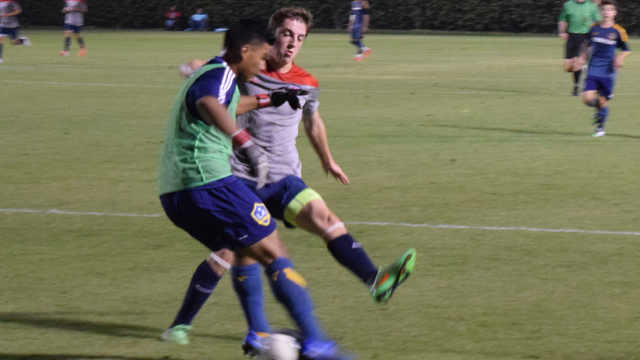 CARSON, California - The U.S. U14 Boys National Team wrapped up its August camp on Saturday with a pair of scrimmages against two of the top teams from the Development Academy U14 age group last season.

Golden State scored four goals in 11 minutes to close out the first half and effective put the game away. While the onslaught of goals easily determined the result, the U.S. struggled breaking the pressure of FC Golden State before any goals hit the net. The youth national team, albeit some of the later developers for this age group, had a rough go of it on the day and a unrelenting attack from FC Golden State turned it into a lopsided affair.

The first chance of the game came in the eighth minute when FC Golden State got behind the U.S. defense. Golden State struggled to get a clean chance on goal, but Issa Badawiya eventually pulled the trigger on a shot that went wide of the post.

The opener came in the 24th minute. Dorian Morrison put a light touch on the ball and U.S. goalkeeper Alex Rando was caught in no-man’s land after coming off his line to try and collect the ball. Morrison shepherded the ball over the line.

FC Golden State piled on the pressure after the opener. Daniel Castaneda scored in the 28th minute. He picked off a pass and ripped a shot from the top of the box that smashed into the net.

Arturo Vasquez on FC Golden State added goals in the 33rd and 35th minutes to push the lead to 4-0 before the halftime whistle put a stop to the one-way traffic.

The halftime break allowed the U.S. to add some poise to the game and keep a handle of the ball, which limited the chances for FC Golden State.

The U.S. had a nice sequence of play in the 58th minute, which led to a shot from Matteo Ritaccio. The FC Golden State goalkeeper made a good diving save to keep the ball out of the net.

The local academy added one more goal two minutes before the end of the game when Oscar Velazquez converted a penalty kick to make it 5-0.

It was a stark contrast between the two games on Saturday. The U.S. team that lacked life in the first game, put on a sterling display in the second contest. Regarded as the A team for this age group, the youth national team showed why in the night contest on Saturday.

The U.S. pulled off a 3-1 win over a talented LA Galaxy Academy squad. The chances came early for the U.S. Luis Arriaga won the ball in a good spot in the midfield and played it into Indiana Vassilev who pulled the trigger from the top of the box. The LA Galaxy keeper made the save to keep it scoreless in the opening minute.

Fifteen minutes into the first half, Arriaga was again in the mix to find the opener for the youth national team. Arriaga tried to slip the ball into the 18-yard box for an attacker, but it caught the heel of a Galaxy defender. With the goalkeeper leaning the wrong way, the deflection appeared to have a chance at providing the breakthrough, but the ball rolled wide of the goal.

Galaxy had three good chances to take the lead starting in the 19th minute, which came after goalkeeper Cole McNally and center back Nicholas Fernandez while trying to clear the ball on a delayed offside call. Fernandez took the brunt of the collision and had to leave the game for a few moments.

Galaxy forward Kevin Negrete tried to make the most of the shorthanded U.S. defense. Negrete forced McNally to come up with a save on a low, hard shot in the 19th minute.

Two minutes later, Negrete picked the pocket of a U.S. defender and then dribbled around him. The defender tugged on Negrete’s jersey to slow him down and the forward stopped running in anticipation of a foul being called on the play, which happened inside the 18-yard box. The referee did not blow his whistle and the U.S. cleared the ball from danger.

Negrete beat the high line of the U.S. defense in the 24th minute and caught McNally pretty far off his line. He tried a shot from over 35 yards out, which McNally had to use his hands to save. The save came outside of the 18-yard box, which resulted in a dangerous free kick for Galaxy. Youngster Efrain Alvarez hit the free kick off the outside of the post.

U.S. regained the momentum of the game in the closing minutes of the half. Vassilev had a good look in the 34th minute when he pulled off a slick turn in the box to beat his defender, but a slight hesitation on the shot allowed a recovering player to knock his shot wide of the goal.

The U.S. grabbed the lead in stoppage time in the first half. A high kick in the box resulted in an indirect free kick which Vassilev played to Arriaga who hammered it home.

Trailing 0-1 at the break, LA Galaxy came out looking for an early equalizer. Alex Mendez hit the crossbar on a shot from 25 yards out in the 39th minute.

Vassilev had another chance at finding the back of the net in the 48th minute when he stole the ball of an LA Galaxy midfielder. Vassilev played it to Arriaga who held onto the ball until Vassilev made an overlapping run and then played it into his feet. Vassilev cut back on his defender, which opened a clear window at goal, but his shot went sailing over the bar.

LA Galaxy found the equalizer in the 55th minute. Mendez hit a brilliant free kick from 25 yards out into the upper corner of the net.

The teams exchanged chances throughout the second half. Galaxy tried to build with a patient attack while U.S. looked to catch the MLS academy out on a counter. It was the U.S. that benefitted from the strategy. The quick attack led to a goal from Ulysses Llanez in the 67th minute.

In stopped time, U.S. added an insurance tally. Marcelo Palomino was hacked down after the high pressure from the youth national team resulted in a giveaway by the Galaxy in the defensive third. Llanez took the free kick and delivered a perfect ball that Vassilev headed home.