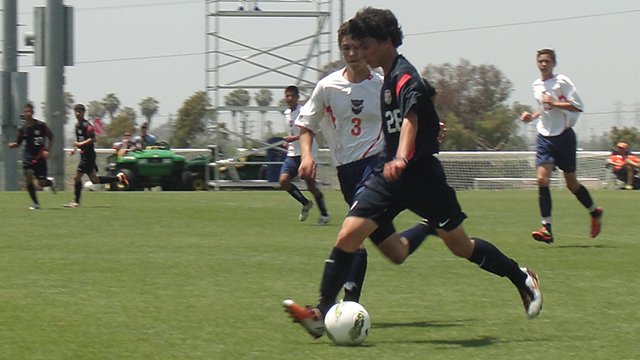 CARSON, Calif. -- Saturday marked the end of Hugo Perez’s third camp in charge of the U14 Boys National Team, and it was by far the best.

“I am very pleased,” Perez told TopDrawerSoccer.com about the weekend games. “The whole week we have been working on certain things, and they are reacting to it. They like the way we are trying to play.” 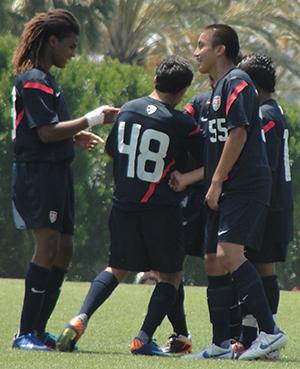 Including both personnel and style of play, Perez and his staff have advanced this group steadily over the last few months. This age group will be in the thick of things for the cycle of players that would compete in the 2015 FIFA U17 World Cup, but these camps are still important in beginning the identification of players who might fit the bill for the U.S. in international competition.

There is a considerable amount of time between then and now, but if Saturday’s scrimmages were any indication – the future is bright for this group.

Both Elijah Rice and Alejandro Zendejas scored two goals and the U14 BNT beat local team Sockers FC (not affiliated with the Illinois club) in a wild shootout.

Rice, a Chicago Magic standout who also had two goals against Chivas USA Academy on Thursday, finished the week with four goals in two games. His first goal on Saturday came just before halftime with the U14 BNT trailing 2-1.

Kyle Gurrieri executed a perfect slide tackle in midfield to win the ball back for the youth national team. Lagos Kunga picked up the loose ball after the tackle and immediate spotted Rice. With only one defender in front of him, the Chicago Magic forward took the space and rifled his effort into the bottom corner of the net from 18 yards out.

“Today, we mixed the teams up a little bit,” Perez said about switching the rosters from Thursday. “And in general, it was pretty solid. We moved some players from the first game on Thursday to the second game today and vice versa.”

In the second half, it was the Elijah Rice Show.

In the 53rd minute, Rice flew by two defenders down the touchline and hit a screaming cross to the far post.Substitute Suniel Veerakone deflected the cross just enough so it trickled over the line.

Two minutes later, Veerakone returned the favor when he delivered a cross off a short corner kick that Rice expertly headed home to give the U.S. a 4-2 lead.

Sockers nearly regained control of the game in the final ten minutes when they grabbed a goal to make it 4-3 and were pushing for the equalizer.

But Zendejas’ solo run through the defense and floating shot over the keeper from 20 yards out put the game out of reach and gave the U14 BNT a 5-3 win.

Kevin Silva’s save in the 18th minute on a breakaway by a CZ Elite forward changed the outlook of the game.

Silva, who is known to play off his line, raced out to meet the attacker about 40 yards from goal. The goalkeeper from Bethlehem, Pennsylvania knocked the ball off the forward’s foot, and let the rest of CZ Elite know it was going to take something special to beat him on the day.

The U14 BNT controlled the possession and the tempo for most of the first half, but rushed into the attack and tried to force the issue, which made life easier for the CZ defenders.

The U.S. did eventually break through just before halftime when Luca de La Torre hustled to a ball that was trickling out of bounds. The Nomads midfielder kept it in play and rounded the defender to the endline. With his eyes scanning the center of the goal, de La Torre picked out Haji Wright at the corner of the box. Wright one-timed the shot into the far corner of the net to give the U14 BNT the lead just before half.

Ten minutes after halftime, Joshua Perez continued his stellar camp with his second goal of the week. Logan Panchot intercepted a pass in a dangerous spot and was promptly chomped down by a defender. Perez stepped forward to take the free kick and hit it around the wall and past the keeper to double the lead.

Joe Gallardo finished off the scoring in the 78th minute when he drilled a shot from the top of the box into the lower corner of the net. Substitute Sean Teixeira set up the play for Gallardo with a timely interception of a CZ Elite pass from the defense to the midfield. Teixeira passed to Gallardo, who cut to the middle of the field and smashed home the final tally of the day.