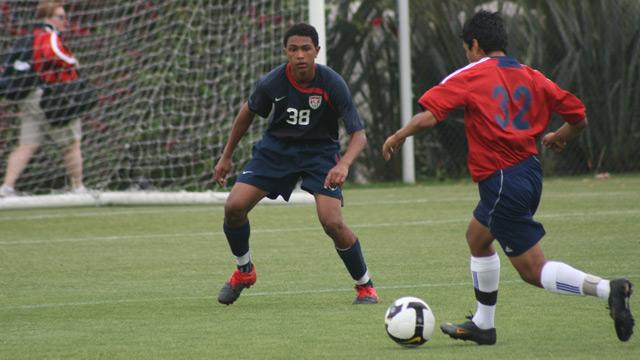 Today, we take one final look at some of the best performing players from last week’s U.S. U14 National Camp, breaking down performances by position.

This may shed some light on which players will be invited back to camp next month.

The goalkeepers did well for themselves. While each brought a different skill set to the field they each played with a common passion and aggressiveness.

James Marcinkowski was one of the more athletic in the net. He’s mobile and can make the quick save when pressured.

Cameron Keys was the smallest of the group but one of the more intense. He covered good ground and played the set pieces well.

The area of defense is one of the more difficult at a U.S. camp because it requires the kind of chemistry and trust that takes time. Having said that, the defensive group was the most impressive of the camp in terms of individual performance. 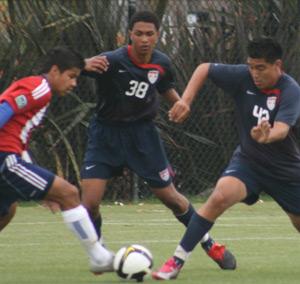 The U14 BNT vs. Chivas USA last week.
Top defending honors for the week goes to Guillermo Bermudez. He showed good understanding of knowing when to step to the ball and help his teammates and his strength and 1v1 marking ability made him a pleasure to watch.

Billy Abdallah plays with passion and maturity. He has a great work rate and an even better attitude, which will give him a leg up on his peers.

Tommy Redding has some of the best physical tools on the team. He is tall and smooth, and also good in the air. He showed a little attacking flair during intra scrimmages early in the week.

This was a very diverse group with different skill sets, but an interesting cast of performers nonetheless.

Mukwelle Akale may have been the fastest player on the U.S. side. But he was more than speed; he also possessed craftiness with the ball that made him a handful despite his diminutive stature.

Kostandin Moni is a really big presence. He’s one of the few guys who stand out because of their physical maturity. He can be a strong defensive factor for the squad.

Chester Castellaw is a big stopping presence. He was strong both physically and technically and plays with poise.

Alejandro Vergara is the young man known by his teammates as “Messi.” Small but dynamic, he’s a little raw at times but plays with an entertaining vigor and a big upside.

Benjamin Swanson plays with great poise and understanding. He’s one of the smaller players on the field but is also one of the veterans of the group.

Cameron Lindley showed a knack for being in the right places at the right time and knows how to set up his teammates.

There weren’t many strikers who separated themselves from the pack. But one in particular was a little more eye-popping at the position than his teammates …

Malcolm Dixon has awesome physical ability. He can flat out leave defenders in the dust, and when he gets the ball he showed a nose for the goal in consistently scoring goals throughout the week.

Amirgy Pineda showed one of the best work rates on the field. He seemed to relish the opportunity to be in camp and his pursuit of the ball sometimes created positive plays for his team.