U14 BNT knocked around by older competition CARSON, California – The U.S. U14 Boys National Team got knocked around a little bit on Saturday, but that is just what head coach Hugo Perez wanted prior to the group’s first international trip to Croatia, which is coming in May.

The youngest youth national team in USSF’s system took on an all-star team from SCYSO, a non-profit league targeted to the Latino youth in Southern California that was coached by Joe Supe, and Chivas USA U16 Development Academy squad. 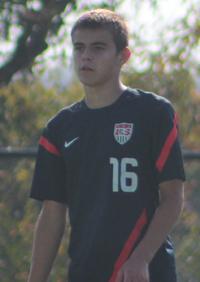 The U14s split the results against the older competition with a win against SCYSO, but a crushing defeat at the feet of Chivas USA in the nightcap.

LA Galaxy Academy’s Jesus Nunez scored twice to lead the youth national team to victory in a wide-open affair. Nunez netted the opener in the first half when he pulled off his mark at the top of the box and placed a shot into the upper corner of the net, which left the SCYSO goalkeeper helpless to try to keep it out.

The all-star team responded in the second half after the youth national team altered its formation. Looking to show more in the attack, Perez moved left back Sam Vines into a midfield role and nearly looked like a genius seconds later when Vines cut through the defense and went one on one with the goalkeeper.

The goalie deflected Vines’ initial effort and then a recovering SCYSO defender blocked the follow-up off the line.

SCYSO took advantage of the three-man backline for the U.S., which did not seem entirely comfortable with the formation switch on the fly. SCYSO grabbed the equalizer on a quality strike that eluded goalkeeper Trey Muse.

U.S. nearly found itself in a hole moments later when SCYSO went back on the attack through the wings against the three-man defense.

Nunez settled the game though with an easy finish thanks to an assist from Jeanpaul Marin.

Muse came up with his third quality save of the second half minutes later to help the youth national team see out the win.

The score does not accurately reflect how the youth national team fared through a large stretch of Saturday’s scrimmage. The U14 BNT trailed 2-1 at half, which was a bit unlucky considering the opening goal came in the first 20 seconds when youth national team goalkeeper Eric Lopez whiffed on a clearance and Chivas USA striker Jorge Ruiz was there for the easy tap in.

Playing from behind did not seem to faze the promising group of players, as they continue to build from the back and push the initiative against older competition.

Left back Edwin Lara set up the first good chance of the opening half with a cross that he whipped into the box in the fourth minute. Jose Carranza was just a step off in judging the flight of the ball and his header barely connected with the ball.

Both teams put high pressure on each other, which closed the field and really picked up the pace of the play.

Ruiz nearly set up Chivas USA’s second goal of the game with a cross to the near post that UC Santa Barbara commit Axel Mendez was able to turn on frame, but Lopez came up with the save to keep the deficit at one goal.

Lara went back on the attack minutes later when another delightful run down the left side before he was chopped down in the box. It was the second time this week the left back, who has trained with Pachuca, has been fouled to set up a penalty kick.

Center back Kyle Gruno stepped up and converted the penalty kick to bring the squads back on level terms.

It only lasted for ten minutes though, as Chivas USA regained the lead when the U.S. failed to pick up its marks following a clearance off a corner kick. Chivas USA center back Sebastian Velasco hit in the cross on the second go, and right back Bilal Abdallah was there for the header.

The older Academy squad held the advantage on the scoreboard at the break, but the U.S. had moments that really pressed Chivas USA.

“I saw something that I haven’t seen in years with our youth – and I am not just talking about national teams," U14 BNT head coach Hugo Perez told TopDrawerSoccer.com after the game. "We picked this team because, obviously, they are on of the best in Southern California. And they are three years older.

"I picked them because I am thinking about Europe now. This is the futbol we are probably going to face, and we need to put our kids in this position because it had become too easy in the last three camps."

The second half quickly turned into a rout though with Chivas USA introducing a couple of more regulars into the proceedings and the U.S. looking like it was running out of gas after a long week of training in Southern California.

Mark Hernandez scored the third goal of the game for Chivas USA following a sequence when Alejandro Vergara slotted in a through ball to Jorge Ruiz to get him behind the defense. Ruiz’s shot was blocked by Lopez, but landed right on Hernandez’s foot for the easy open net finish.

Chivas USA then brought UC Santa Barbara commit Caleb Calvert off the bench, which was the figurative final nail in the coffin. Calvert, who has spent the last four months playing with the U18 squad, scored three goals and dished out an assist in 20 minutes of play on Saturday. Calvert’s helper came on a goal by fellow UC Santa Barbara recruit Adonis Amaya who netted the final goal of the game.

"We are happy not only with the effort, but how we tried to play at all times," Perez added. "Obviously, the kids made mistakes – it’s normal. Most of these kids don’t even play in Academy [yet]. I told the kids, ‘If we would’ve packed it up [for the second half], it would’ve been closer. But, no way - we don’t play that way. Losing this way is a good experience – it keeps us humble and keeps us working. Now, I think we are ready for Europe.”