U15 and U17 National Teams continue camp 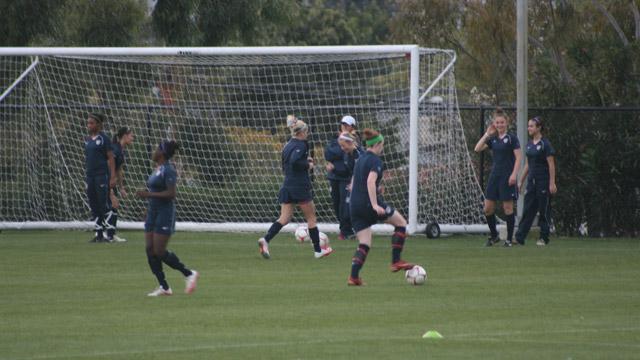 Carson, California – Tuesday was the second day of the U.S. U15 GNT and U17 WNT joint training camps at the fields of the Home Depot Center, with coach Jill Ellis putting both squads through a strenuous morning session.

“For the younger ones we mainly focused on individual and small group defending, getting them up to 2v3 defending,” said Head Coach Jill Ellis. “With the older ones we did more functional work.”

The U17s were put through drills focusing on passing, movement without the ball, and quick switches of directions. Then the defenders worked under Ellis, learning how to move together while keeping their shape intact. 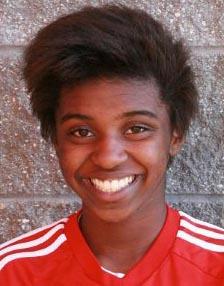 Rilka Noel
Later in the morning the U15s had workouts to test players’ attentiveness by having them transition from offense to defense in rapid sequences.

“This group is still isolating themselves when they play,” Ellis said. “One of the things we’ll try to talk about is to be connected defensively and offensively so that we can find each other. “

Both sessions wrapped up with a 30-minute 11v11 match. It was a way for Ellis to see the girls play as well as let their personalities out.

On the U15 side, Gabriella Kaplan, from MVLA Lightning, made a great run to get some penetration, and laid the ball off to Carmel United’s Reilly Martin who buried it in the back of the next. Michigan Hawk’s Rilka Noel tallied a goal for her side, taking a shot from inside the 18-yard box.

“I saw some really good personalities in the big game that I haven’t seen in the smaller stuff,” Ellis said of the U15 girls. “I think they are very technical, but not as much with pressure. But overall, we got a lot of players that can do some things with the ball.”

On Monday, Ellis explained one purpose of the joint camp is to help her get to know the respective playing rosters.

“Right now I oversee the two teams, so just logistically having both camps together is good,” she said. “This is the first camp I have been with the U15s, so I will be primarily focused with that group.

“You know a kid plays about 100 games a year, but if they aren’t clean technically, they aren’t going to get any better,” she said. “They need to sometimes go backwards and break it down, and some of that is what we will be doing here.”

The two teams will play their first matches tomorrow evening. The U17s will face Loyola Marymount and the U15s will matchup against Cal South 95 Girls’ State Team. TopDrawerSoccer.com will have a full report Thursday.