U15 BNT Heads to Netherlands As the U.S. Men’s National Team gears up for World Cup qualifying, a group of aspiring MNT players takes a trip abroad.

The U.S. U15 Boys National Team is traveling to Holland for a ten-day trip this week, heading over for a pair of friendlies and to compete in the Marveld tournament in the Dutch city of Groenlo.

U15 head coach Tony Lepore announced a 20-player roster early this week that will fly to Europe on May 24 and return to the States on June 4.

“It’s a competitive selection, we feel like we’re leaving some good players behind and had some tough decisions,” he told TopDrawerSoccer.com by phone. “But positionally this is the way the group shaped up.” 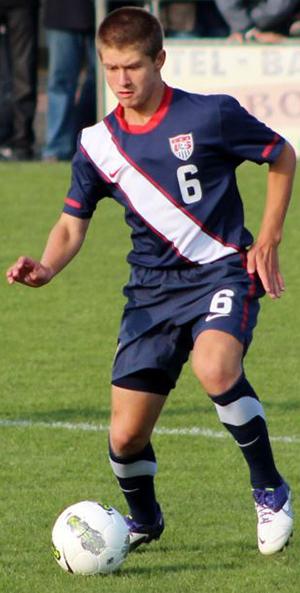 Lepore, who has been the U15 head coach since the cycle began last fall, usually calls in around 36 players at a time. But like in past years, he had to trim the group in order to compete in the tournament

The roster is compiled of what he calls the “core” of the current player pool, with only two new faces in the trip – LA Galaxy Academy goalkeeper Abraham Romero, from the U14 player pool, and forward Rigoberto Rojas from the Chicago Blast.

Also joining the group are the three age-eligible players from the U.S. U17 Residency in Florida, Tommy Redding, Cameron Lindley and Mukwelle Akale. They’ll be integrated in the group, and Redding and Lindley, who both earn significant minutes with the U17s, will need to help carry the load.

“[It’s] a great opportunity for them to come back and play some challenging same-age international games,” Lepore said.

After arrival, the U.S. U15s are scheduled to play a pair of full-match friendlies against Academy side from Dutch clubs Feyenoord and Vitesse in preparation for the tournament.

Then, from June 1-3, the team will wrap the trip up at the Marveld Tournament. The U.S. was drawn into a six-team group, and will play shortened matches against Academy sides from FC Twente, Feyenoord, Ajax, Real Madrid and Bayer Leverkusen on June 1 and 2, before settling in for placement games on June 3.

One of the main goals of the trip is to simply test the U.S. group against high-level opposition.

“In general, going to Europe, we’ll get to measure ourselves against some of the top players at this age in the world, and so the idea is to be challenged, and the development and growth that comes from that environment of being challenged and all that [helps accelerate] their development,” Lepore said.

Along with that goal of moving along the process of this particular group, Lepore said another objective is to implement the style of play the group has adopted from the beginning of the cycle.

From an evaluation standpoint, not a lot changes as the coaching staff continues to take a look at this age group. Rather, it gives the players a different and more difficult environment to cope with, allowing for the coaches and technical staff to grasp how players respond to external influences such as travel, physical demands of the tournament, along with a variety of other factors.

After the trip, Lepore will break things down from a position-by-position perspective.

“We try to put that all in a positional sense as well,” he said. “Because there are certain things our forward need to work on versus our defenders, versus our midfielders, versus our ‘keepers. So we try to define it pretty position-specific with our evaluations on a trip like this.”

Joining Lepore on the coaching staff for this trip is former MLS player Dave van den Bergh. A native of Holland, van den Bergh’s playing career began there with Ajax and FC Utrecht, before he came to the United States to play in MLS for Kansas City, New York and FC Dallas.

With that background Van den Bergh – who served as an assistant on the U.S. U20 MNT under Thomas Rongen – brings a very unique perspective to the trip, and his knowledge of both U.S. and Dutch soccer is certain to be an asset.

“He brings a really good variety of experience as well as having someone in Holland who knows the lay of the land will be really useful,” Lepore said. “He’s also part of our scouting network, so I thought it would be a good opportunity to bring Dave in.”

One player who won’t be on the trip is Gedion Zelalem. The midfielder, who has trained with Arsenal over the past year, has been involved with previous U15 BNT camps despite not having a U.S. passport.

Even though he’s been excluded from the Holland trip, and the fact that he is also being pursued by the German youth setup, Lepore said Zelalem remains in the mix to play for the United States.

“He’s still working on getting his U.S. passport, [and] we’ll continue to include him because he wants to play for the U.S,” he said. “I speak with him regularly, we stay in touch with him. We’re tracking his progress.”

Regardless of who is over there, it’s certain to be a big test and a positive experience for this group of rising stars.