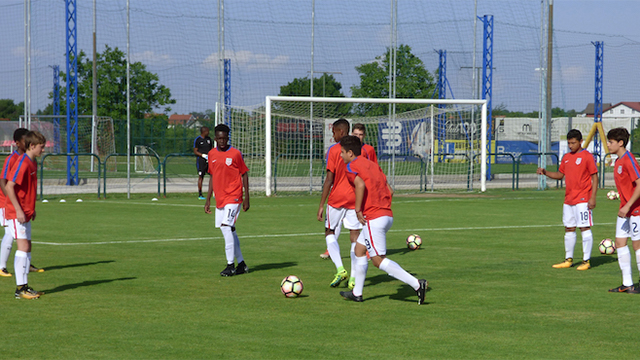 The U.S. Under-15 Boys’ National Team will head to the 2019 Torneo delle Nazioni in Gradisca, Italy from April 23 to May 5. The tournament marks the first international games of the year for the U-15s, who are preparing for this summer’s 2019 Concacaf U-15 Boys’ Championship.

The USA will face India on April 28, Slovenia on April 29 and Mexico on April 30 in the tournament’s group stage. Steve Klein, Academy Director at U.S. Soccer Development Academy club PA Classics will serve as the U-15s’ head coach for the camp. The 19-player roster is made up of 18 players born in 2004 and one born in 2005.

Following the group stage, the USA will play placement games. The rest of the tournament field is listed below:

The USA has participated at the last two editions of the Torneo delle Nazioni. Last year, the U.S. U-16 BNT finished third overall after going undefeated in the group stage. Three of the 2003-born players at last year’s tournament – defender Mauricio Cuevas, midfielder Daniel Leyva and forward Tyler Freeman – were recently named to the U-17 MNT roster for the Concacaf U-17 Championship.

The core of the current U-17 MNT took home the Torneo delle Nazioni title in 2017, coming from behind to defeat England 2-1 in the tournament final with goals from Giovanni Reyna and Joseph Scally.