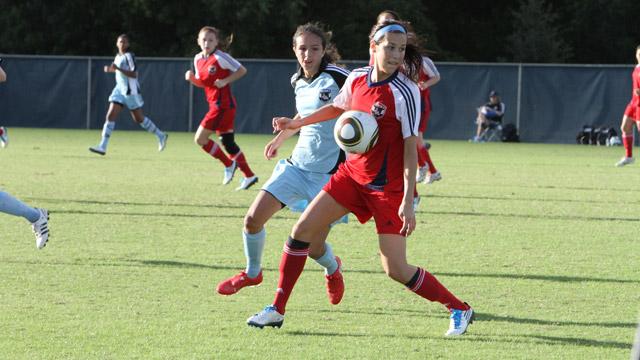 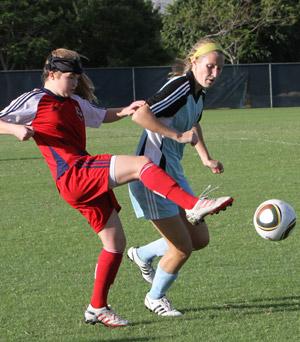 BOCA RATON, FLORIDA – Participants at the U.S. Youth Soccer Girls ODP Interregional had a big Thanksgiving Day dinner planned at their hotel Thursday, but first there was a quintet matches to be played here at Florida Atlantic University for 1993 and 1994 birth year age group teams, including a final match for Mike Dickey’s U15 Girls National Team.


The U.S. squad dropped a hard-fought 3-2 encounter with the Region IV ’94 team in what was one of the better-played matches of the week. Jerry Smith’s westerners showed some extra spirit in battling for every 50-50 ball and also attacked fluently behind excellent play by Makenzy Doniak, Ryan Walker and Kodi Lavrusky.


The U.S. team went on top in the 1st half with a goal from Summer Green, set up by Zoe Swift. Green is fast but showed today she also had a good range of skills on the ball and no small ability to hit a dangerous short pass in the forward third.


But Region IV began to take over the game at this point and Walker, a Mustang Blast product, made a strong run down the right before cleverly pulling a pass back for Doniak, whose shot appeared goalbound before it was blocked on the goalline by U15 and CASL standout Joanna Boyles.


Minutes later it was Lavrusky, from Legends FC in Southern California, hitting an excellent cross over to Walker, whose powerful downward header was again blocked at the goalline by Boyles. Green rolled a good pass to Rosie DiMartino on the other end but her shot was well saved by Region IV goalkeeper Andi Tostanoski.


Region IV kept battling and Doniak, a Slammers player who showed today she can put in a tough tackle along with her offensive skills, played a killer through pass for Walker, who finished well to make it 1-1 at the halftime break.


Region IV went up early in the 2nd half when a Lavrusky shot was saved by Carissa Miller and Walker was there to knock home the rebound. Walker and Lavrusky are both good athletes with exceptional agility, but also with some good soccer ideas inside.


The U.S. team seemed to wake up a bit at this point and newly-inserted Elizabeth Boon of Columbia Timbers made a good run down the right and played a good ball across the penalty area, but it was never corralled and the chance went begging. The Region IV defense was swarming in response to every U.S. foray, but the national team eventually got the equalizer as Miranda Freeman connected with a looping header off a set piece to make it 2-2.


A draw looked like a fair enough result but Region IV kept coming and it was Alex Anthony of Real Colorado who provided the winning goal, chasing down the rebound of her own blocked shot and turning to fire home for a 3-2 victory.


Jerry Smith acknowledged that playing a national team of any age is an extra incentive for his group.


Doniak and Walker agreed, and said the team improved its performances as the week went on.

U15 GNT coach Mike Dickey said he was pleased with his team’s performance over the week.

In other games Thursday…


Region III 94s 7, Norwegian College of Sport 0: Anna McClung and Jasmine Patterson each scored a hat trick and Sophie Groff added a single tally. The outmatched Norwegian club team was a big disappointment this week. For players of this level to gather together so infrequently, you’d like to ensure that they will get 3 quality matches, and the teams that had to play this squad did not.


Region III 93s, 2, Region I 93s 2: Cheyna Williams and Margaret Casscells-Hamby scored for the southeastern side, but Danielle Colaprico and Cassie Pecht found the target for Region I.


The event closes Friday with final matches for the ’95 and ’96 age groups. Then it’s up to Orlando to cover the Boys ODP event and U14 BNT camp.