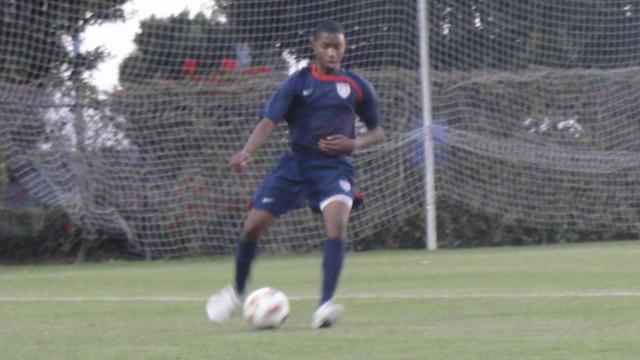 CARSON, CALIFORNIA - Only three days into the March camp and the U15 boys national team already faced its first test.

On Tuesday night, the U15 Boys National Team scrimmaged against local MLS U16 Academy teams, Chivas USA and LA Galaxy. U15 national team head coach Tony LePore divided his group of 36 players into two teams for the friendlies, which ended with a win over Galaxy and a loss to Chivas USA.

The Goats took their chances well in a 4-2 victory in the first game, but in the latter contest, LePore’s second squad battled to a 2-1 victory in a physical matchup. 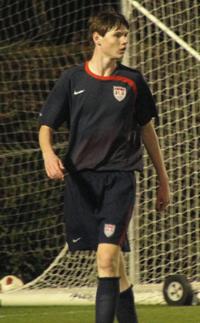 Henry Martin
“A lot of this week is about evaluation,” LePore told TopDrawerSoccer.com after the games. “Tonight we got two good games from Chivas USA and LA Galaxy, and it was really valuable for our guys.”

Even though training has been limited for this team so far at the Home Depot Center, LePore felt like the group is just picking up where it left off when it last ended camp in December.

“We have a core of returning players, and seven new players this week,” LePore said. “With the core, we are trying to go from where we left off. I think what has been nice is that we don’t feel like we are starting over with every camp.”

Throughout both games, the U15 national team did enjoy lengthy spells of possession, which came to the delight of the coaching staff that had focused on retaining control of the ball in recent practices.

“I thought it was a good start to camp,” LePore added.

Chivas USA forward Caleb Calvert played like a man amongst boys in the first friendly of the night. The tall striker who goes by the nickname Rooney scored a first-class goal to give Chivas USA the lead early in the second half, which they would not relinquish after trailing for much of the first half.

Sebastian Saucedo grabbed the first goal of the game in the fifth minute when he stole the ball in the midfield and caught the Chivas USA keeper cheating off his line. The well-placed shot from 30 yards out to give the U15 national team a 1-0 lead early.

“For his first time into camp, we thought Sebastian Saucedo had a really great night,” LePore said. “He is off to a really good start.”

Saucedo played the attacking midfield position in a 4-3-3 formation, and appeared to fit in very easily with the dynamic of the team.

Chivas USA responded with a goal right before half time after a careless give away was neatly finished by a Chivas USA forward.

In the second half, Calvert took control of the show. His deft chest trap to a spinning volley was a touch of class to give Chivas USA the 2-1 lead.

Ryo Fujii added another goal 16 minutes later when he dribbled through multiple defenders and ripped an effort into the upper corner that keeper Miguel Martin could not keep out.

The U15 national team closed the gap four minutes later though when Orestis Sousonis dribbled past a few would-be challengers and lofted the ball over the defense into the path of Collin Fernandez.

Fernandez calmly finished the shot to bring LePore’s group back within one goal, but no one could stop Calvert.

Billy Abdullah delivered a perfect corner kick to Calvert’s head for the striker’s second goal of the game to cap the opening match.

“The possession was good in the first game,” LePore said. “I also felt [center back] Sean Wilson was solid and Benny Swanson was good an the no. 8.”

Amir Bashti contributed to both goals in the second half, as the other U15 team overturned a first half goal by LA's Martin Arrieta to grab one win on the night.

Arrieta found the back of the net in the 30th minute when he hit a one-time effort from 25 yards out into the bottom corner of the goal.

LePore’s group rallied in the second half behind Bashti, who was denied in the 55th minute when his shot from 20 yards out clanged off the crossbar.

Schropp’s header went off the post to Abulkadir Haji who put it away to level the score at one a piece.

Five minutes later, Bashti combined with left back Marc Calderon down the sideline to send the defender in behind the defense. Calderon cut his cross back to the top of the box and Bashti hammered it home for the winner.

The coach also highlighted the play of Schropp, who wore the captain’s armband in the second contest, and Malcolm Dixon.