U16 GNT to play in UEFA tournament 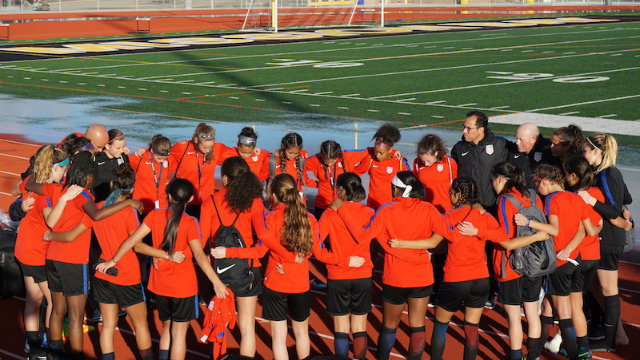 The U.S. Under-16 Girls’ National Team will travel to Portugal to participate in the UEFA Women’s International Development Tournament being held from May 12-16 in northern Portugal, about 75 miles north of Porto.

In the four-team tournament, the USA will face Belgium on May 12 at Rebordosa AC Stadium in Rebordosa, take on host Portugal on May 14 in Capital Móvel Stadium in Paços Ferreira and finish against Switzerland on May 16 at Municipal Stadium Coutada in Arcos Valdevez.

The development tournament will feature some unique rules. All the matches in the tournament will consist of 40-minute halves and if the score is tied at the end of regulation, teams will go directly to penalty kicks to decide the winner, with three points awarded for a win in regulation, two points awarded for a win in penalty kicks and one point for a loss in penalties.

Each team is allowed nine substitutes during a match, but no more than three stoppages per team to make subs are allowed during the second half.

In addition, the tournament will utilize an experimental “Sin Bin” system for players that commit “temporary dismissal offences.” Red and yellow cards are issued in accordance with the Laws of the Game. The temporary dismissal is only to be used when the referee would have issued a yellow card for any of the following offences:

A player who has been temporarily dismissed is allowed to return to her team’s technical area and cannot be substituted for an eight-minute temporary dismissal period. A goalkeeper is treated in the same way as field players.

To underline the development nature of the tournaments, each player must play at least 80 minutes across the three matches and UEFA recommends that each player should play no more than 120 minutes over two consecutive games.