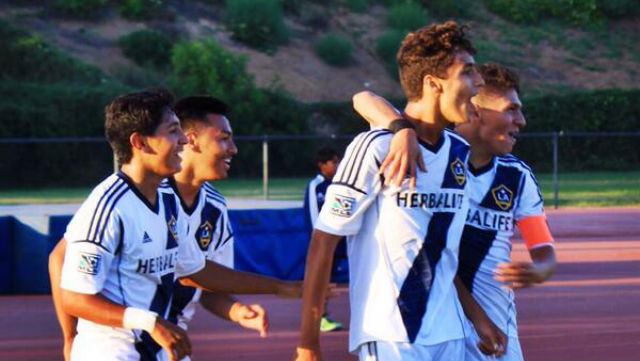 Tuesday marked the second round of Development Academy playoff quarterfinals, as teams had one more shot at advancing to the final four.

Teams hosted quarterfinal matchups in this year's revised format, playing a one-off knockout game that whittled the U18 field down on Monday. On Tuesday and Wednesday, it was the U16s' turn.

It was a see-saw affair for the West Coast powerhouse Galaxy, which had its hands full with Michigan club Vardar.

In the first half, LA jumped out to a 2-0 lead on the strength of two goals from Ethan Zubak. But Vardar answered back with three unanswered goals in the second stanza; a goal each from Alex Ofeimu and Tommy Dokho leveled proceedings, and Dohko struck again to put Vardar up 3-2.

Midfield maestro and California recruit Rey Ortiz came to the rescue for the Galaxy, as his brace came at the right time, putting the home side back up in front with less than ten minutes to go. Dylan Smith added a stoppage time goal to put the game away and secure LA's spot in the semifinals.

With just minutes to go, time was running out on the Red Bulls, which trailed 2-1 in the dying moments of its quarterfinal clash with Strikers FC. New York leading scorer Ethan Lochner popped up in the 80th minute to tie the game at 2-2 to send it to penalty kicks.

But the Strikers were relentless still, finding a way past the Red Bulls on penalties. An own goal and a strike from Jackson Kerins staked the California side to an early lead 22 minutes into the game. New York's Marcello Borges cut into the lead in the 39th minute, before Lochner setup extra time and penalties with his equalizer.

Another road side that jumped out to a quick first half lead in Tuesday's action was the Chicago Magic. Two goals from Kendall Stork pushed the visitors out in front of the Canadian side 24 minutes in, and the score remained locked at 2-0 at the half.

The second half saw the Whitecaps pour forward looking for a way back into the game. The hosts struck the woodwork three times, while the Magic defense cleared multiple chances off the line. In the 65th minute, Dario Zanetta found the back of the net for the 26th time of this campaign, but it would be all Vancouver could muster, as Chicago booked its trip to LA.

Weather couldn't prevent Real Salt Lake-AZ from getting past MLS counterparts San Jose and into the semifinals.

Thirty minutes into Tuesday's first attempt at its matchup, weather forced a postponement with RSL up 2-0 against the visitors, with play scheduled to restart (as per FIFA rules) on Wednesday morning.

It took RSL a bit longer to open the scoring the second time around, as Evan Waldrep broke a 0-0 deadlock with a 60th minute tally. The Creighton recruit's strike stood as the only goal of the game, as RSL-AZ chases another U16 crown.