U16, U17 rosters out for Nike Friendlies 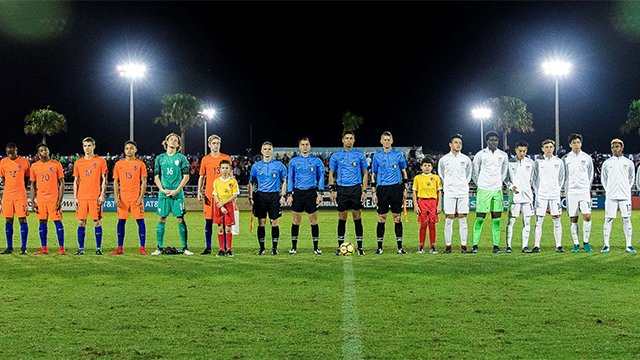 The 19th annual Nike International Friendlies will be held November 14-18 at the Premier Sports Campus in Lakewood Ranch, Fla. The elite, four-team tournament will welcome back the Netherlands, Turkey to compete against two U.S. squads, the U-16 Boys' National Team and U-17 Men's National Team.

For Netherlands and Turkey, the tournament will serve as preparation for the 2020 UEFA U-17 Championship, to be contested by 2003-birth year players from May 21 - June 6, 2020 in Estonia. All four teams will arrive in Florida on Nov. 11 to begin training for the tournament.

Launched in 2001 before adopting the current format in 2008, the Nike International Friendlies were founded to provided top-level competition for the U-17 MNT and stand as one of the premier annual events on the youth soccer calendar. Seven players currently in camp with the senior MNT participated in past Nike International Friendlies: Paul Arriola, Corey Baird, Sergiño Dest, Weston McKennie, Christian Pulisic and Josh Sargent. The event has also seen international talent like Brazil's Phillipe Coutinho, Neymar and Marcelo and England's Jadon Sancho grace the field at Premier Sports Campus.

At the 2018 Nike International Friendlies, the U-17 MNT finished as runner-up after going undefeated vs. Portugal, Turkey and Brazil. All three games were tightly contested, as the USA took down Turkey 1-0 while drawing both Portugal and Brazil 1-1. The USA last took home the Nike Friendlies crown in 2016, downing its three opponents by a combined score of 15-2.

Both Portugal and Turkey are frequent opponents for the U.S. at the Nike Friendlies. The two countries have appeared at the tournament five of 11 times international competition has been included, tied for the second-most all-time behind Brazil.