U17 MNT falls 4-3 against Portugal

U17 MNT vs. Portugal Highlights
by Travis Clark

Jose Postiga scored a hat trick in the first half as Portugal jumped out to a 3-1 lead, before goals from Peter Schropp and Alan Winn erased the deficit. But João Lima’s 84th minute winner secured the Nike Friendlies title for the Portuguese.

“The whole tournament I thought we attacked very well, moved the ball very well at times, but obviously we gave up too many goals,” U17 head coach Richie Williams told TopDrawerSoccer.com. “We’ve got to get that better overall as a team, and defending as a team and not giving up such easy goals at times. I think we put a lot in earning our goals, and sometimes we just kind of hand the other team some goals, and unfortunately they took their chances and made the best of it.” 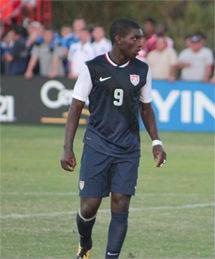 Within the game’s first five minutes, the U.S. missed a golden chance to take the lead. A Portugal defender passed the ball straight to midfielder Corey Baird in his own half. The San Diego Surf product threaded a ball in for a streaking Ahinga Selemani, but the forward miscontrolled the ball in the box, allowing for a Portugal defender to come in and clear the danger.

It wouldn’t be long before Postiga made the U.S. pay for its early miss, as the forward outraced center back Conor Donovan on the break to open the scoring in the 12th minute.

Selemani would make up for his earlier miss, tying the game in the 20th minute. A deflected cross from left back John Requejo, Jr. hung up in the box long enough for Selemani to run under it and power a diving header home to equalize at 1-1.

However, the U.S. defense couldn’t contain Postiga, who outmuscled Donovan and latched on to a long ball to slot home past goalkeeper Evan Louro in the 40th minute.  Five minutes later, a failed clearance on a low, driven cross gave Postiga a chance for his hat trick, and he obliged in first half stoppage time.

The U.S. had plenty of fight left, and pulled a goal back almost immediately after the half, as Peter Schropp headed home a corner kick in the 49th minute. Thirteen minutes later, the score was tied when substitute Junior Flores found Alan Winn on a quickly taken free kick, and Winn evened the score at 3-3.

Needing a win to capture the tournament title, the U.S. kept pressing forward for an equalizer, only to see Lima score from a corner kick with six minutes left to seal the result.

The obvious conclusion drawn from this game – and the Brazil match – is that the U17s must work on fine-tuning its defense before the CONCACAF qualifying tournament in April. Attacking talent is something this group has in good supply, but to be really special, tightening things up at the back is paramount. Injuries are certainly a factor, with center back Tommy Redding still recovering, but as a whole the defending needs to be at a better level for this team to reach its potential.

While the team came up short, the quality of this group is very high. All players made mistakes and errors at different points of the game, but the technical level of the team especially stands out, with a number of crisp passing moves made in tight spaces, and the team possessing the ball extremely well during stretches of the match.

One of the youngest players on the field at the final whistle, Cameron Lindley, was also one of the most impressive in his 30 minutes substitute appearance. A holding midfielder, Lindley hardly missed a pass and offered the U.S. a comforting presence in the middle of the park. It was another strong performance after Lindley excelled in 90 minutes against Turkey on Friday night.

Williams started with Corey Baird in the No. 10 role against Portugal, appearing to favor the midfielder in that spot over Junior Flores, who played on the wing when he came on as a second half sub. Flores set up the team’s tying goal, thinking quickly to find Winn on a free kick, but couldn’t turn the tide of the game by himself.