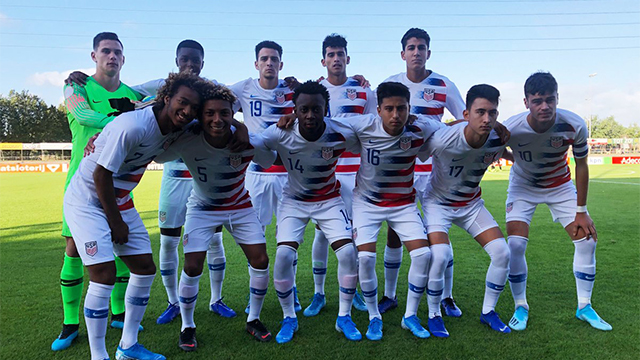 The U.S. Under-17 Men’s National Team wrapped up its final game at the 4 Nationals Tournament in the Netherlands on Monday, finishing in second place with a 2-1 record.

Signifying the final preparations ahead of the October World Cup in Brazil, the U.S. came one result shy of winning the competition.

Needing a win or draw to finish atop the four-team table, the United States were unable to manage either, hitting the post twice with the score tied at 0-0. Two goals on either side of the half for the Danes ensured that Mexico would emerge as the table-topping side after the three matchdays.

Substitute Noah Jones provided the lone goal in the defeat with the U.S. already trailing by four goals late in the second half.

The U.S. defeated the hosts on the back of a two late second half goals. After Kobe Hernandez opened the scoring from the penalty spot in the 19th minute, Soulyman Allouch nabbed the equalizer in the 71st minute.

But goals from Jasson and Gil Fuentes provided the winning margin for the United States against a group opponent at this year's World Cup.

Nice win over the host nation 💪

Ricardo Pepi's 88th minute winner provided a successful start to the United States' stint in the Low Countries, as the U17s overcame a 1-0 deficit to pick up a win against its Concacaf rivals.

Bryan Gonzalez netted the game's first goal for El Tri in the 56th minute, which was canceled out just over 10 minutes later by Giovanni Reyna. Pepi secured the win, slotting home off a nice pass from Ethan Dobbelaere.

Today was a good day for the U-17 #USMNT 🇺🇸 >> https://t.co/qGuoCRojgu pic.twitter.com/4Dsxo74GOu