U17 MNT forward elects to stay in state 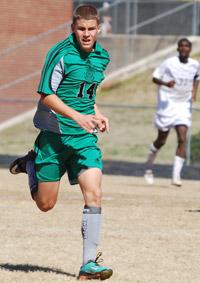 After a long search process, Dowse, a hard-working midfielder from Georgia, saw everything that he liked at Dartmouth.

“Following unofficial visits all across the country where I witnessed various academic and athletic environments, I was better able to understand which elements are most important to me as a student athlete,” he told TopDrawerSoccer.com. “Dartmouth’s academic programs rank among the best in the world. The opportunity to receive an Ivy League education coupled with being a part of a nationally competitive Division I soccer program provides the ideal college experience.”

The Big Green did themselves plenty of favors by being one of the first programs to actively recruit the Concorde Fire standout.

“Dartmouth was the first school to take an interest in me and has remained consistent throughout the recruiting process,” Dowse said. “Coach Cook and his staff have a proven record of success in developing players and teams.  I had the opportunity to visit during Brown weekend and was struck by the camaraderie and mutual respect among players and coaches. There is a real single mindedness of purpose with a genuine and unselfish excitement for the individual accomplishments of each player.”

Score one for the Spartans.

The third ranked player in the class of 2014, Ahinga Selemani, verbally committed to Michigan State in November, deciding to join the rising power in the Big 10. It won’t take him too far from home, as the Michigan native is a standout for Crew Soccer Academy Wolves.

Selemani is a main fixture for Richie Williams’ U17 men’s national team, and he’s scored 8 goals so far this year in various exhibition and friendly matches. The speedster is eligible to represent both the United States and Canada at the international level.

Bennett Kim, a member of Indiana United Fire U18s, verbally committed to Butler for the class of 2014.

Vincent Reyes, a defender for LA Galaxy Academy, committed to Florida International for the class of 2013.

Lex Craggs, a goalkeeper for Ocala Stampede (Florida), committed to Florida International for the class of 2013.

Drew Ramsey, who plays for Carlsbad Elite, committed to Cal State Monterey Bay for the class of 2013.