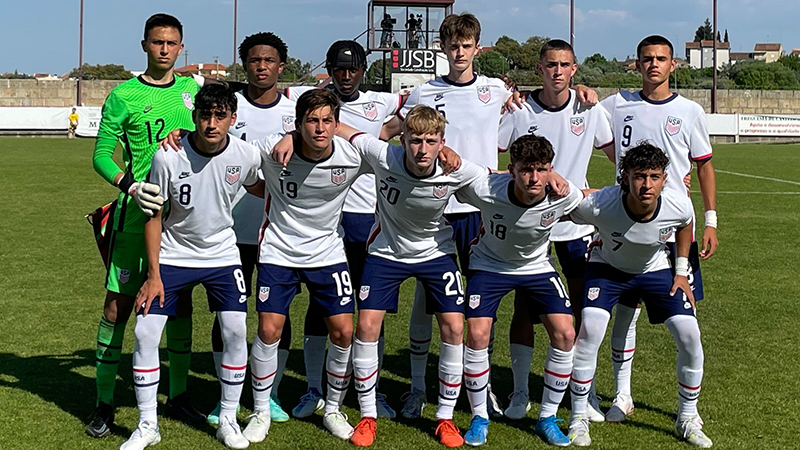 Micah Burton’s attempt was pretty optimistic. The U17 MNT substitute had just received a pass in the box, almost perpendicular to the net — far from the ideal angle to shoot. But his side had only mustered four shots all game, and with the second half needing an injection of energy, he swung his right foot at the ball. It wasn’t a fizzed shot, nor was it particularly well placed. But it was awkward for the Portugal keeper, who let it squirm through his arms and into the net — giving the U17 MNT a 1-0 lead.

Burton’s speculative strike established a lead that his team wouldn’t relinquish in an intriguing UEFA Development Cup group stage match. After a languid first half, the game came to life in the second, with the US using two goals in 10 minutes to beat Portugal, 2-1.

Following a lethargic opening period, US coach Gonzalo Segares tweaked his side, notably bringing on Burton, who scored the opener in the 55th minute. Cruz Medina added a second from the spot just 10 minutes later. And although Portugal found one of their own from another penalty kick, they couldn’t muster an equalizer — largely thanks to a series of smart saves from US keeper Inigo Esmanech.

With the win, the US picked up their second victory at the UEFA Development Cup, moving to 2-1 over their three-game stint in Portugal.

It was admittedly difficult for either side to draw much from the opening 45 minutes. Back and forth, the ball rocked. Side-to-side, it glid. And then there were the tackles. Well-timed slides, perfectly-calculated blocks. A toe poked in here, a leg lunged there. Such was the pattern of the first half; a game largely played in the midfield, active but lacking in attacking clarity.

The two sides combined for six shots, of which four were on target. Both keepers were more likely to be controlling a pass and recycling play than they were to make a diving stop.

The US’ most consistent threat came from the energy of Andre Gitau. The left winger was a menace cutting onto his right, but none of his three first-half shots troubled the keeper. And when he looked for a teammate, his attempts seemed to be perennially blocked by a Portugal defender.

But things changed with the introduction of Burton at half time. His creativity and industry made an immediate impact. And it was him that provided the US opener, bursting into the box, evading his man, and firing a shot on goal. It wasn’t the best strike, but a blunder from the keeper saw the ball squirm into the net for a 1-0 lead.

Medina doubled the lead less than 10 minutes later. After a clear foul in the box, he deftly chipped the spot-kick into the net — giving the US a comfortable 2-0 advantage.

But the US couldn’t exert any control on the match. In the 65th minute, Nuno Patricio stepped up the spot after a US handball in the box. He stroked his penalty into the bottom corner, evading the outstretched hand of Esmanech.

The #U17MYNT is headed home after winning two out of three in Portugal! pic.twitter.com/76WrODLZ3C

The keeper didn’t fail to make an impact shortly after, though. With Portugal on the attack, Esmanech dashed off his line, sending a low shot around the post to keep his team in the lead. There were further issues for the US to contend with, too. Tyler Hall made a sliding clearance. Esmanech was forced into another diving save. Both US fullbacks had to make lunging tackles to keep the ball away from the 18 yard box.

With the game more open — and Portugal pushing for opportunities — there were more chances on the counter-attack. Accordingly, Segares shuffled his pack, adding some pace and creativity into the lineup.

But it didn’t change the outcome. Though the US had their moments on the break, the last 15 minutes was a case of defending the lead. And they did it with aplomb, denying Portugal of any clear cut chances as the clock wound down.

That resolute stand that completed the second half complemented an aggressive first 15 minutes that opened it. That combination was enough to cap off a successful three-game slate in Portugal, a trip where the U17s showed real promise against some of the top youth sides in Europe.

And although their performance will have no bearing on qualification for any major tournaments, showing that quality against some of the best could well be vital in the development of this group of intriguing talents.