U17 WNT Player Ratings vs. Panama The U.S. Under 17 Women’s National Team put in its fourth straight dominant performance to secure its spot at the 2012 Women’s World Cup in Azerbaijan.

Summer Green scored another hat trick as the U.S. cruised to a 7-0 win over Panama, securing a World Cup spot as well as a chance to claim the CONCACAF Championship against Canada this Saturday at 6:30 PM EST. Read the full match report of the win.

Here’s how the U.S. players fared in the clincher: 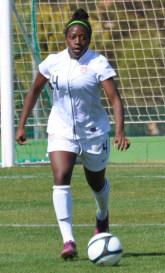 GK: Jane Campbell, 6 – Another quiet day in goal for Campbell, who touched the ball perhaps once or twice through the 90 minutes.

D: Brittany Basinger, 7 – Excelled once again down the right flank, using her pace to get forward and add another threat to the U.S. attack.

D: Madeline Bauer, 7 – While Panama’s attack wasn’t the fiercest, Bauer was very solid in both her positioning and calmness on the ball.

D: Miranda Freeman, 7 – Like her center back counterpart, had little to do but answered everything that was asked of her when needed.

D: Gabbi Miranda, 7 – Didn’t get forward as much as Basinger did on the right, but provided good service when she did before coming out as a sub.

MF: Morgan Andrews, 8 – Once again, Andrews was all over the place, protecting her back line and taking a cleat to the knee in the first half. Scored her first goal of the tournament on an absolutely unstoppable free kick.

MF: Morgan Stanton, 7 – Took care of business in the middle of the park, covering ground, winning balls and trying to get on the end of balls in the box.

MF: Toni Payne, 7 – Playing out of her normal forward spot as an attacking midfielder, Payne made a seamless transition, opening the scoring with a tap-in

F: Darian Jenkins, 7 – Jenkins overcame a slow start to the game – missing a number of early chances – to find the back of the net in the second half.

F: Emily Bruder, 7 – Her relentless energy helped setup the first goal of the game in the ninth minute, and the U.S. didn’t really skip a beat from there, as Bruder was steady throughout the match, getting a goal towards the end of the game.

F: Summer Green, 9 – It was another outstanding afternoon for the USA’s leading scorer, as she bagged a hat trick, increasing her goal tally at the tournament to 12.

F: Andi Sullivan, 7 – Entered with the game already set, but put in a tireless shift trying to maintain pressure on the Panamanians.

MF: Joanna Boyles, 7 – Came in for Andrews in the holding midfielder spot, and the U.S. didn’t skip a beat.

D: Elizabeth Raben, 7 – Got a chance to make her first appearance along the back line, entering for Miranda in the second half.