U17 WNT ramping up for CONCACAF qualifying 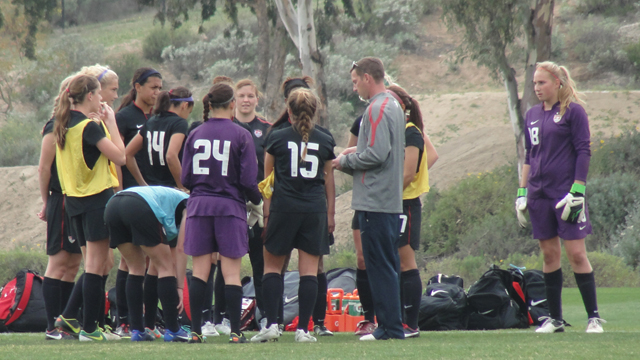 Halloween decorations have already started appearing in grocery stores across the country, which typically means that the seasons will change soon and leaves will touch the ground. For a very select group of soccer players and coaches though, it has a different meaning this year.

Halloween, or to be more precise October 30 is the start of the 2013 U17 Women’s CONCACAF Championship in Montego Bay, Jamaica. The regional event is used as the qualifying event for the 2014 U17 World Cup.

“The camp was good. Big focus was putting together a fitness program for each of the players,” U17 WNT head coach B.J. Snow told TopDrawerSoccer.com. “It was also about working on the team shape.”The U.S. U17 Women’s National Team has been hard at word preparing for the event, and recently wrapped up its fourth camp of 2013.

The 10-day camp was held on the campus of The Ohio State University, not one of the traditional locations for the national team.

“The Crossfit games [prevented the camp from being held at the StubHub Center]. We couldn’t find a hotel within 30 miles,” Snow explained. Crossfit, a strength and conditioning program, holds its annual national competition in Carson, California. The popularity of the event has quickly grown.

“We were lucky it worked out,” Snow continued. “It worked out well for the players from the East Coast who did not have to make the cross-country flight.”

Beyond fitness, Snow also said the camp focused on the ‘leadership panel’ of his group as he starts to find the players who will be the key cogs for the team during the qualifying spell.

“I think we got way more out of the camp than [the coaches] expected,” he added.  “We had a 10-day camp, we normally have a week long camp, and those extra days were critical as we build toward qualifying in October.”

Snow said they were able to squeeze those extra days in due to the players being on summer vacation (both from school and club soccer).

Among the 28 players called into camp were a few new faces including two born in 1999 - Colorado Rush’s Civana Kuhlmann and PDA’s Frankie Tagliaferri.

“I was overwhelming pleased with both of them,” Snow said. “You never know what you will get when you bring in a new kid to camp . . . both of them were tremendous. They were sharp and competitive. They held their own in every activity.”

Unlike on the men’s side of the game, female players are permitted to make more than one appearance at the U17 World Cup level. Although, Snow made it clear that calling in Kuhlammn and Tagliaferri is about the 2014 cycle.

“We wouldn’t have brought them if we didn’t think they could hold their own. When it comes to selecting players, we are trying to select the best players for this age. They proved their worth this level and it certainly shows well for the 1999 age group.”

Next up for the U17s is a trip to England later this month where they will play England’s U17 Women’s National Team twice. Snow said he will be taking 20 players on the trip.