U17 WNT Win Two, Draw One in Europe 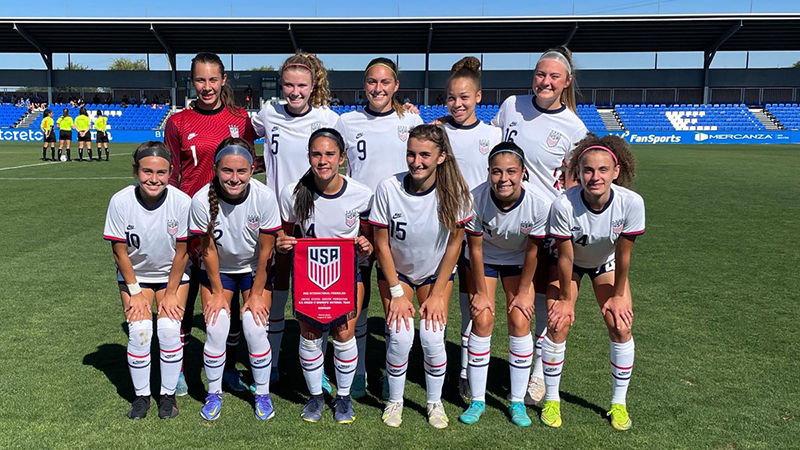 The U.S. Under-17 Women’s Youth National Team defeated Germany, 1-0, in its last of three matches in Europe this month. The trip served as the final event for the U-17s before the roster for the 2022 FIFA U-17 Women’s World Cup is chosen.

In the first two games of the trip, the USA defeated Spain 2-0 on Aug. 23 and then drew with Spain, 1-1, on Aug. 25. Germany and Spain clinched berths to the 2022 U-17 WWC by finishing first and second at the 2022 UEFA Women’s U-17 Championship as Germany topped Spain in penalties to claim the European title. Spain is the reigning U-17 World Cup champion after winning the 2018 FIFA U-17 WWC in Uruguay.

The tightly contested match featured five shots from the USA and six from Germany, but the U.S. was the team that put away one of its chances, coming in the 31st minute via forward Emri Adames, who also scored the USA’s lone goal in the team’s draw with Spain.

The goal was sparked when midfielder Lauren Martinho played a give-and-go with Adames, who ran onto a through ball with space in front of her and finished across the goalkeeper and into the corner. It was Adames’ second international goal at the U-17 level.

U.S. U-17 WYNT head coach Natalia Astrain called up 24 players for this event, including 17 who helped the USA qualify for the World Cup on the way to winning the Concacaf Women’s U-17 Championship last spring. Players born on or after Jan. 1, 2005, are age-eligible for this U-17 Women’s World Cup. Astrain selected 18 players born in 2005, five born in 2006 and one born in 2007 for this roster.

Three goalkeepers split the shoutout with Victoria Safradin playing the first half and Abigail Gundry and Amaral splitting the second.

The three games served as excellent preparation for a U.S. team that is readying itself for the 2022 FIFA U-17 Women’s World Cup in India, which will be contested from Oct. 11-30.