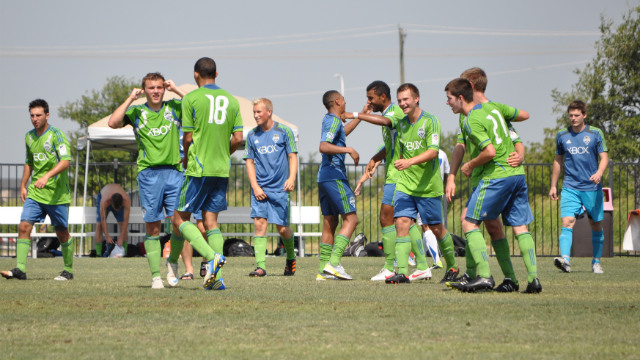 by Will Parchman & J.R. Eskilson

FRISCO, Texas—It wasn't the first time this week at the Academy Playoffs that the heat was a significant factor.

As the temperatures crept towards triple digits, U18 squads played their third game in four days, settling the field for the U18 Finals Week, as eight side advanced to Houston.

Here's a look at some of the action on Thursday:

It took a second half comeback, but Seattle Sounders Academy punched its first ever trip to Finals Week thanks to a 3-2 win over IMG Academy. 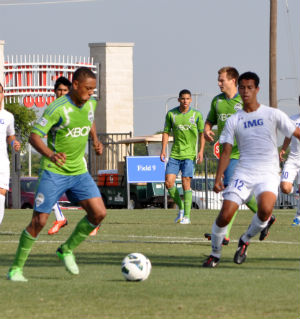 Henry Wingo (left) looks for an opening against IMG.

The Sounders started the brighter of the two sides, possessing the ball well and keeping IMG pinned in its own half. The pressure paid off with an early goal from David Olsen in the 17th minute.

IMG responded well, however, and tied the game shortly thereafter on a golazo by left back Carlos Hurtado – his spinning bomb from distance eluding Sounders goalkeeper Paul Christensen.

The Florida side then shocked the Sounders with a well-worked second, goal, a left-foot finish from Nicolas Buhler edged IMG out in front, much to the Sounders’ surprise.

“We played really well during the first half and at halftime we were down 2-1 and we were stunned, they maybe had three attacks in the first half,” head coach Richard McCormick said.

Seattle didn’t panic, and it was Jordan Morris who tied the game just a minute into the second half, set up by Ike Crook’s long diagonal ball that found the speedster in the left side of the box.

However, the stakes were high in this game, as only a win would assure either side of qualifying for Finals Week – a draw could see both teams get knocked out. And IMG looked to jump out in front through Yussuf Olajde, one of the most dangerous players on the field.

And just when it look like Seattle would get back in front thanks to Crook winning a penalty in the second half, Duncan McCormick’s spot kick was saved well by the ‘keeper to keep it at 2-2.

The breakthrough finally came for Seattle thanks to midfielder Henry Wingo, who capped a solid shift by finishing off a well-worked passing sequence with an emphatic right-footed shot.

The Sounders defense managed to kill the game off and celebrated a spot in Houston at the final whistle.

“For them to come down here and play in the 100 degree heat, where we don’t play every day in Seattle, it’s fantastic,” McCormick said. “They showed a tremendous amount of courage and every game they played was really good soccer, and hopefully people got to enjoy it.”

The Whitecaps provided another clinical, vibrant attacking display to win their third game in three days in Frisco. This one locked up Group 1 to earn the entertaining 'Caps one of eight spots at Finals Week next month.

The 'Caps fell back 1-0 early, but two goals from standout midfielder Marco Bustos and another from Yassin Essa assured the 'Caps' passage to the next level. Vancouver outscored its opponents 11-3 in its three games, more goals for than any other U18 team at the Development Academy Playoffs.

"It's a big step for the club and us personally," Bustos said. "We've been together for almost two years now, and I think it's time for us to win something. It's a great honor to be in the national championship."

This one provided a glimpse at the highest-scoring team in the academy facing off against the league's best defense, and the 'Caps super-charged front line won the day. Vancouver's three goals Thursday gave them 10 for the playoffs, while the PA Classics, who hadn't given up a goal in their first two games, entered Thursday's game needing a win to leapfrog Vancouver to win the group.

For a short time, the Classics looked like they might nip the result. About 20 minutes in, Joey Julius got his head to a free kick and knocked it inside the near post for a 1-0 lead. PA Classics, which had given up a minuscule 15 goals during the regular season, set up shop to defend with two deep midfielders.

But the lead only lasted minutes. Bustos cut in and cracked a shot that the keeper could only get a fingertip to, tying it at 1-1 in a flash. Essa gave the 'Caps the lead in the second half on a shot just minutes after he missed a penalty kick, and Bustos tacked on a third with about 15 minutes left.

Bustos' tournament was one to remember. The future PDL player scored four goals and had two assists in Vancouver's three games. His soft touch, ability to get forward and eye for goal left an indelible mark on the tournament. He said Thursday he hopes a homegrown contract isn't far off.

"I'd love to play for MLS, especially as a homegrown and show people who look up to residency kids like us who think they can get to the next level," Bustos said. "Just show them it's possible with a hard work rate."

Vancouver will head to Houston for Finals Week next month as one of the favorites. After losing in the final game last year, the talented U18 squad is hunting for the championship this time around.

"We're hoping to basically show what we have," Bustos said. "To basically perform and all show well personally, and get guys moving on, scholarships and maybe pro contracts and just show what we're made of. Show that Canada deserves to be one of the best youth areas in the league."

Shattuck wilted in the thick Texas heat during a mid-day game, but they still qualified for Finals Week thanks to a pair of good results earlier in the week and a positive result elsewhere Thursday in Group 5.

Shattuck trailed Solar 2-0 at half, opening the door for Kendall SC, which was playing Pateadores in the other Group 5 game. But Kendall couldn't make up the goal differential necessary to steal the finals spot, and Shattuck added a second-half goal to assure they'd play again next month.

The game assumed a sluggish tenor from the start as the 100-degree temperatures sapped much of the speed out of the game. So it was fitting that the opener came off a set piece, a corner that Barry Foster tapped in from point-blank range about 30 minutes into the game to give Solar the lead.

Solar kept pushing while Shattuck's attacks continually petered out in the final third. Solar found its second just before halftime, Jesse Miralrio Toledo plunging toward the box from deep and stinging a low shot into the corner to double the lead on stunned Shattuck, which won its first two games to top the group headed in.

Shattuck added its only goal about 10 minutes into the second half. Substitute Eddosa Muhammed executed a perfect turn at the top of the box and laid back a pass for Lesley Nchanji, who only had to poke his goal into the corner.

Marco Bustos, Midfield, Vancouver Whitecaps: Bustos polished off a banner tournament with two goals Thursday, leaving him with four goals and two assists over the 'Caps' three games in Frisco. Vancouver is soon headed to Finals Week, and Bustos' calm, resourceful play in the middle was a major factor.

Joey Julius, Forward, PA Classics: The SIUE commit was a thorn in Vancouver's side Thursday, finding cracks in the 'Caps' stellar defense and providing the prime outlet for the Classics' midfield. He also scored the game's opening goal to make Vancouver work for its win.

For the New York Red Bulls, a sputtering start to the Academy Playoffs is a distant memory.

An offensive explosion led by Amando Moreno, Ethan Decker, Adam Najem saw the Red Bulls jump out to a 4-1 lead, and cruise to a first place finish in Group 4.

“I thought the team played well,” head coach Paul O’Donnell said after the win. “We knew that Weston was a quality side. They do play a high line, we played them in the Winter Showcase so we knew we were going to have to be effective beating the offside trap, and I think the first two goals were breakaways.”

A team consisting mostly of last year’s U16 National Champions, Moreno was the star of the day, with two goals and two assists, setting up goals by Najem and Decker. Marius Obekop came off the bench and added the fifth tally on the day.

Under the hot and muggy early afternoon conditions, Baltimore Bays outslugged a tired Indiana Fire side, thanks to midfielder Patrick Koscher’s first half winner.

The Bays answered from a corner of their own, defender Samuel Wancowicz heading home a Jacori Hayes delivery. Koscher bagged what ended up being the winner, heading home right before the halftime whistle.

As the second half progressed, both sides struggled to create chances and Bays held on for the one-goal win. Neither side ended up at Finals Week, however, as De Anza Force nabbed top spot in Group 7 with its 1-0 defeat of Chivas USA.

F Jordan Morris, Seattle Sounders: The speedster was one of many Sounders to excel on the day, as he was virtually unguardable storming down the flanks against IMG. His early second half goal was decisive in helping Seattle punch its ticket to Houston.

MF Marco Bustos, Vancouver Whitecaps: Bustos polished off a banner tournament with two goals Thursday, leaving him with four goals and two assists over the 'Caps' three games in Frisco. Vancouver is soon headed to Finals Week, and Bustos' calm, resourceful play in the middle was a major factor.

F Joey Julius, PA Classics: The SIUE commit was a thorn in Vancouver's side Thursday, finding cracks in the 'Caps' stellar defense and providing the prime outlet for the Classics' midfield. He also scored the game's opening goal to make Vancouver work for its win.

D Michael DeGraffenreidt, Baltimore Bays: Bound for Louisville, the quick and athletic defender was very solid in the middle of the park for Bays, helping the defense settle into a rhythm after an early goal conceded.