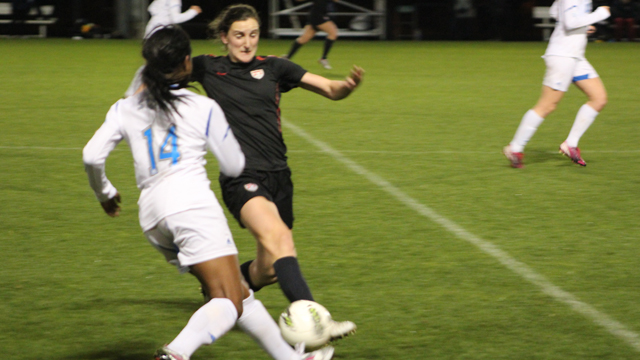 CARSON, Calif. – The U.S. U20 Women’s National Team defeated UCLA 3-2 on Friday in a game that featured all five goals scored by the youth national team.

With two own goals in quick succession in the second half, the friendly between the U20s and the women’s college soccer team ended up being decided by a goal with only three minutes left from Texas Tech’s Janine Beckie. 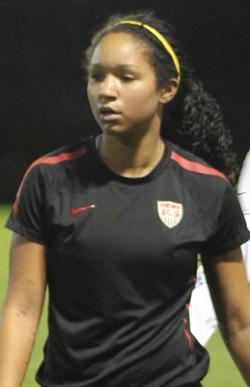 Despite the close score, the U.S. U20 WNT had a strong outing with good spells of possession and fluid attacking play that opened up the defense of one of the best teams in college soccer last season.

It was Mewis who had the first shot of the game when Taylor Smith broke free down the right side and served the ball back to the center midfielder at the top of the box. Mewis’ effort went over the bar.

U.S. found the back of the net for the first time in the game in the 15th minute when Virginia star Makenzy Doniak hit a well placed shot inside the far post from the left side of the box for the opener.

Doniak helped double the lead 20 minutes later when she whipped in a cross that UCLA could not clear. After a scramble for the ball, Sullivan hit a shot into the thicket of legs in front of the net. Farrell controlled the ball, turned under pressure, and tucked it away from six yards out to give the U.S. a 2-0 lead ten minutes before half.

The break provided a much-needed restart for the UCLA squad, which is only in the beginning stages of spring practice and still in search of a new head coach after B.J. Snow accepted the U.S. U17 Women’s National Team job last month.

The Bruins benefitted from two unlucky breaks by the youth national team defense in the opening 20 minutes of the second stanza. The first own goal came when a Bruins attacker’s heavy touch allowed the U20 goalkeeper to come off her line and knock the ball away from the forward. However, the ball inadventantly went off Morgan Andrews, who is playing center back with this team, and nestled into the back of the net.

Five minutes later, a cross by a UCLA winger to no one in particular looked to be an easy cover for the U.S. defense, but a miscommunication between the goalie and the defense led to a header that caught the keeper in no-man’s land.

With the score back on even terms, the U.S. U20 WNT started to force the issue for the final 20 minutes in search of the winning tally.

Winger Darian Jenkins (Colorado Rush/Riverton, Utah) was the main catalyst of the U.S. attack, as her relentless attack on the dribble exposed holes in the Bruins defense. Jenkins, rightfully, was rewarded for her stellar play with the game-winning assist.

Beckie was in the right place at the right time to put home the winner late.