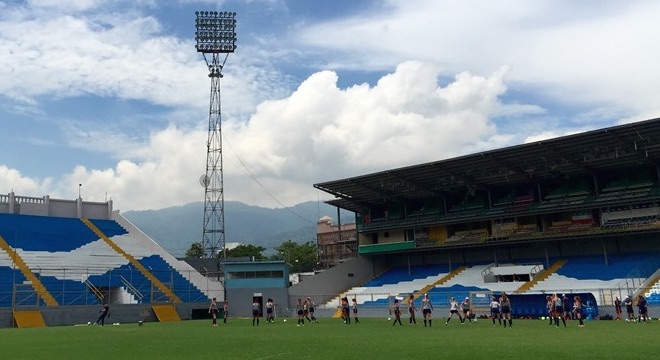 The 2016 U20 Women’s World Cup is in Papua New Guinea, which is an oddity all its own. The tropical nation of seven million tagging off the northeastern coast of Australia has never hosted a major international soccer tournament. Its facilities, too, had come under scrutiny by FIFA as recently as October, forcing the nation’s prime minister to announce the nation would be ready when the tournament kicks off Nov. 13, 2016.

As exotic as the locale may be, the goal for the U.S. U20 Women’s National Team is unerringly similar: qualify, advance and win a World Cup.

The first rung in that ladder begins Dec. 3 with the 10-day U20 CONCACAF qualifiers in San Pedro Sula, Honduras. A recently announced 20-player roster is prepping to continue the heady progress begun in coach Michelle French’s first go-round and one-up its relatively disappointing World Cup from 2014.

"While finalizing the roster for this qualifying competition posed different challenges due to the college season, we are very happy with the players we have named to the roster,” French said in a release. “We have a great mix of talent, sophistication, and athleticism at every position. The group is comprised of players with experience in CONCACAF competitions, as well as quite a few who will be playing matches of this magnitude for the first time. As a result, we are looking forward to watching the team grow during the tournament.”

To start here, the first thing is to go back. And any analysis of this tournament leads you across a primrose path to one conclusion; the U.S. will not struggle.

The U.S. U20 WNT has won 15 consecutive games in this competition venturing back to 2008, when Canada upset the U.S. 1-0 in the final. That encompasses titles in each of the last three tournaments, and none of them were close. That should give you some indication of how breezy the U.S. experience has been in this tourney. CONCACAF on the women’s side is considerably more segregated between the haves and have nots in its talent distribution.

Even with the heaps of success the U.S. has had here, 2014 stood out. With a college-heavy roster thanks to the tournament’s January date, putting it firmly after the college calendar ended, the U.S. posted a plus-19 goal differential in group play and won its two knockout matches 6-0 and 4-0. The team ultimately outscored its five opponents 29-0, and Mexico, the team it beat in the final, boasted a plus-18 goal differential in the other group.

Not close. Not hardly.

The U.S. will not breathe easy considering the stakes, but even a moderately decent performance will put them through to a fifth CONCACAF U20 title. All the U.S. needs to do to qualify is either make the final or win a third place game.

If there is a tripwire here, it’s Mexico. The U.S. was paired in a group with the Mexicans this time, and that Mexico team is rapidly advancing in sophistication. Still, the U.S. trounced Mexico 4-0 in the final of the last qualification cycle, and as ever the U.S. will simply need to play to its capability to win out. Not a foregone conclusion, but it’s the likeliest result. The U.S. also faces Panama and Haiti in the group stage.

The American roster, announced late last month, is unusually bent toward club players due to the timing of the tournament. Twelve of the 20 players called in - 60 percent - have yet to matriculate to college ball, although what it lacks in college experience it more than makes up for in talent.

The headliner here, as it always seems to be these days, is Mallory Pugh. The 2016 midfielder/forward hybrid made French’s roster for the last U20 World Cup as a precocious high school sophomore, and she’s back as a senior for one more crack. Pugh struggled to find a singular position in 2014, as she was oftentimes shoehorned into a lineup that settled as a misshapen 4-2-4 that didn’t suit her Clint Dempsey-like tendency to drop in and run at defenders.

This time, the attack is entirely built around her, and she’ll provide the attacking fulcrum from here through the World Cup. The U.S. goes as Pugh does. Goalkeeper Rose Chandler is the only other player on the roster who was also at the U20 Women’s World Cup.

Like the men’s U17 team in 2013, the women failed to qualify for the 2014 U17 World Cup, and there are six holdovers on this roster looking for redemption: Zoe Redei, Marley Canales, Kelcie Hedge, Natalie Jacobs, Taylor Otto and Pugh. A successful recent swing through Spain - with wins over Rayo Vallecano (4-1) and Atletico Madrid (3-0) - lends to the idea that the team is gathering strength.

The defense will assuredly be its typically dominant self considering the U.S. has given up a single goal in its last two qualifying tournaments. The call-up of Stanford commit and De Anza Force standout Tierna Davidson is a particularly pleasing development. The biggest question mark is perhaps whether, sandwiched by so much talent on either side, the midfield can uphold its end of the bargain.

This was precisely the problem at the 2014 Women’s World Cup, where a dearth of technicians in the middle led French to essentially throw everything forward and abandon the center. It didn’t work, and the U.S. crashed out in the first knockout round against North Korea.

Nothing the team does tactically in Honduras will likely squash its chances at getting to the tournament, but it would be a plus to see some improvement in that area this month. More to the point, this is a tremendously attack-oriented group. Capable attacking central midfielders like Mikaela Harvey (Texas A&M), Canales, Hedge and Jordan Harr all like to live in dangerous spaces, which lends to the idea that the U.S. will be throwing plenty of numbers forward in this tournament.

This is just a stepping stone to next year’s tourney in Papua New Guinea, but it can still tell us whether this is the same dominant U.S. of old or whether CONCACAF is closing ground. Unless its inexperience catches up, the former is a much safer bet.