The TopDrawerSoccer.com Combines recently stopped by Chicago. Below are some of the notable performers from the event.

M Ellie Geier, Sockers FC (2019) - Geier is a quick player on and off the ball. Off the ball she has the ability to cover a lot of ground. With the ball at her feet she makes quick decisions and seldom loses possession. Geier will be a great addition to any program at the next level.

M Julia Olander, Eclipse Select (IL) (2020) - Olander excelled in the small sided games. Her ability to create space without the ball was on full display. Olander was constantly checking to the ball and creating angles to open up channels to receive the ball. Her awareness of space and opponents will prove to be an asset at the next level.

M Fernanda Soto Diaz, Eclipse Select (IL) (2021) - Soto Diaz impressed with her work rate. She was constantly on the go, moving and never resting. Her hard work on the day impressed numerous coaches. Her relentless work rate will give her the potential to exceed at the collegiate level.

M Morgan Halliwill, Indiana Fire Juniors (2019) - Halliwell was by far the most consistent player for the day! She’s a versatile player who excelled in numerous roles during the small sided scrimmage. This versatility will give her the potential to excel at the next level as she has the ability to play more than one position.

GK Grant Calvert, Sporting Kansas City (2020) - Calvert excelled in the morning’s skill sessions. His ability to cover between the posts and his extension explosion gives him the potential to do well at the next level.

F Alex Moskal, Sockers FC (2019) - Moskal possess good vision off the ball. He’s also a consistent player who holds possession of the ball well. His ability to keep the game simple will prove to be an asset at the next level.

D Kevin Payne, Vardar Development Academy (2020) - Payne is a solid defender who has the potential to become a good leader. His ability to organize and communicate with his backline was evident during the full field scrimmage. 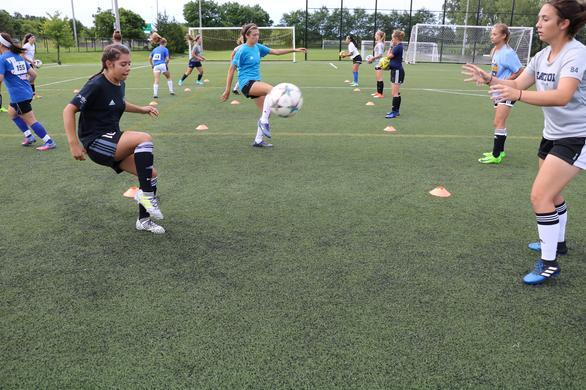