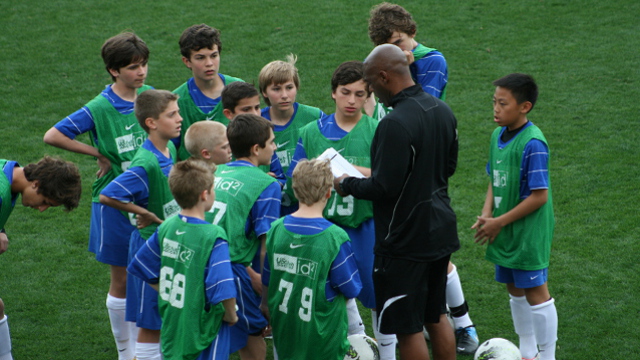 CHARLESTON, S.C. – The final spring US Club Soccer 2013 id2 Program Training Camp for boys born in 2000 and girls born in 1999, had its first day of 11 v 11 scrimmages at Blackbaud Stadium on Friday. Teams will be rearranged based on Friday’s results and new teams will face each other on Saturday afternoon and Sunday morning. Check back for more highlights over the course of the weekend.

Friday’s team rosters are listed below, with the starters for each scrimmage in bold. Goalkeepers on the girls side shared time in the scrimmages and did not wear numbers.

Team Seven started the game pretty much dominating possession and it paid off within minutes when McLean midfielder Ashley Ventura corralled the ball 25 yards from goal, turned and scored in the upper left corner to make the score 1-0. Not five minutes later South Carolina United FC’s Catherine Austin made the score 2-0 when a ball popped out to her feet and she made a nice chip over the goalkeeper.

After 10 minutes, Team Five began to see more possession but couldn’t seem to control the ball in the final third, and the halftime score remained 2-0.

The second half saw a lot more even play, though it was not reflected in the scoreline, as goals from PA Classics Rachael Dorwart and Crossfire’s Kelsey Turnbow  made the final 4-0 for Team Seven. Lanky forward/midfielder Turnbow has the ability to turn and shoot quickly and her shots are quite accurate. Dorwart did well in the midfield, as did NJSA 04’s Casey Palmer. Center back Jacqueline Scheafer from Jacksonville United is a calm, smart center back with good feet. 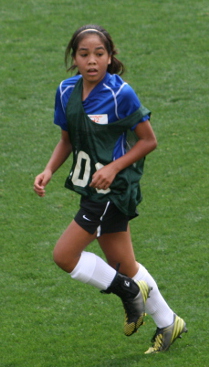 Players that fared well for Team Five include Challenge SC midfielder Alyssa Malonson and Tophat center back Kayla Bruster. Malonson, though the smallest player on the field, was strong in challenges and composed on the ball. Bruster had a knack for being in the right place at the right time, and her smartly-timed tackles kept the score from being more of a rout.

The second scrimmage of the day looked to be more evenly matched than the first, but Team Six begged to differ.  Midway through the first half Albertson SC midfielder Hope Breslin had a 1v1 with the goalkeeper and slipped it past from 5 yards for the first goal of the match. Tualatin Hills United midfielder Mya Lopez made the score 1-1 with a beautiful corner kick that the keeper tried to tip over the bar. Lopez is very light on her feet, usually made smart, quick passes and was the bright spot for Team Eight.

Team Six would score again before half time to go up 2-1 when Dallas Sting midfielder Neaka Khalilan ripped a shot from 25 yards.

Team Six held possession throughout the second half and scored three more times on goals from Crossfire forward Mary Johnston (who played a good bit of the game at left back), Dallas Sting’s Alexandra Arenas, and another from Breslin, for a final of 5-1.

Team Eight standouts, in addition to Lopez, were Vardar left back Gabriala Jodzis who was strong in the tackle and Colorado Rush midfielder Tess Boade.

Team Six standouts included the midfield duo of Grace Nguyen (Tophat) and Kailee Coonan (Penn Fusion), left back/ forward Johnston, Breslin, and Northwest United center back Delaney Watson. Watson was extremely calm on the back line and made good decisions.

Team One got off to a good start thanks to MPS Bulldogs left back Connor Haskell, who won the ball, then dribbled up the flank with ease in the first half. He assisted the first goal for Team One with a great run to the end line, cutting the ball back inside the six-yard box, where it was easily finished by FC Westchester forward/midfielder Jared Juleau. NJSA 04 defender Justin McStay scored the second goal of the half on a shot from 25 yards. 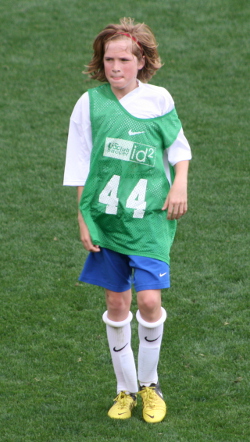 Team Three brought the game to within one on a shot from distance by Vestavia Hills midfielder Clay Holstad that pinged of the crossbar into the path of FC Delco forward Jack Dugan, who was able to finish from relatively close range. Holstad was one of the smallest players on the field, but held his own for sure.

In the second half, FC Golden State winger Alanjames Perez finished from 20 yards to leave the final score 3-1 in favor of Team One.

It’s not an exaggeration to say that Team One was bigger at every position than Team Three, but Team Three made up for what it lacked in stature with skill and determination.  Midfielders Holstad and NJSA 04’s Bobby Zaccaria did well in the middle of the park for Team Three, while Penn Fusion’s Nate Antignani made some good runs from the right back position. For Team One, in addition to the admirable play from Haskell, there was good work in the midfield from PA Classics Seth Kuhn and FC Bolts Celtic Ohad Yahalom.

The final scrimmage of the day was interrupted by a pretty strong thunderstorm midway through the first half, but play was able to resume relatively quickly.

Before the rain delay, forward Nicolas Garcia-Morillo of Ives Estates SC was active, getting to the endline and making crosses, but it was Match Fit Academy forward Cody LeCava who provided Garcia-Morillo with the game’s first goal. It was LeCava’s cross that Garcia-Morillo volleyed home. LeCava finished one himself after the rain delay to put Team Four up 2-0.

Calverton Cerritos SA forward Ronald Alexis Cerritos can turn on a dime and provided Cleveland Whitecaps’ John Andrew Tascar with Team Two’s only goal. Cerritos’s quick feet allowed him to get to the endline where he expertly cut the ball back to the awaiting Tascar for an easy finish.

In the final minutes, Garcia-Morillo beat his defender and finished on a 1v1 with the goalkeeper to make the final score 3-1.

Other than those immediately involved in the goals for Team Four, the diminutive CASL midfielder Colton Pleasants was a pleasure to watch in the center of the field. He rarely, if ever, lost the ball, was completely unafraid to enter a tackle against players twice his size, and had the ability to perfectly weight a pass.