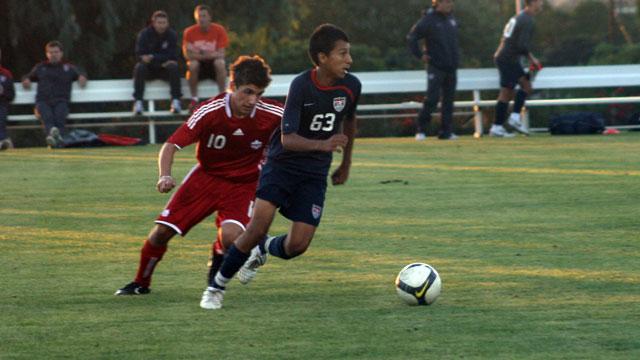 The U.S. U15 BNT training camp continued at the Home Depot Center and in all fairness, it just wasn’t the American boys’ night.

Although the team in the 2nd match was victorious over Real So Cal U16, 3-1, Canada’s U15 National Team downed the  other U.S. squad by the same 3-1 margin.

“I think the starting point would be looking at opposition that is a year older than us, which is a lot at this stage. In terms of soccer I thought it was pretty good,” U.S. U15 assistant coach Gerry McKeown said. “Certainly the first half was fine, but in the second half the game became more of a physical battle.”

McKeown is deputizing for head coach Jim Barlow who is busy with college duties at Princeton, and assistant coach Tony Lepore, who is absent because of a death in the family. 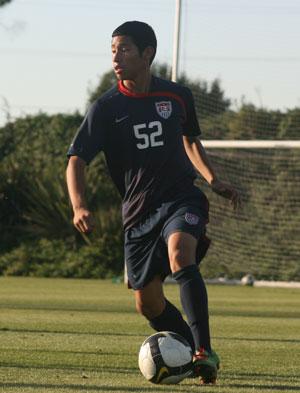 Jorge Calix
The reason for McKeown to say it was a fine first half is that this was when the U.S. went on top, with its only goal of the game.

“Omar Castro played a nice through ball to Wesley Wade,” McKeown said. “He actually did a good job in slipping into a spot off a diagonal run in between the central defenders. He had a really nice first touch and a good finish.”

It was probably the only major highlight in a game where the Americans just couldn’t connect. There was no solid link between the defense, midfield, and offense. The U.S. was overall no match in speed and strength to its Canadian counterparts.

The first two Canadian goals strictly came about from the speed of its target forward.

“Canada played very direct and unfortunately their striker was bigger, faster, and stronger than our center backs,” McKeown said. “We couldn’t match it and our two backs didn’t figure out how to deal with him as a unit.”

Patrick Khouri and Bruno Scodari had their hands full and couldn’t contain Canada’s offense. One failed to play behind the Canadian forwards to sweep, while the other engaged. Twice they were caught flat-footed, and twice they were punished for it.

On the offensive side, there weren’t many accolades. Even Surf’s Corey Baird, who shined on Tuesday, couldn’t do much harm. He tried to take over the game again, but failed to deliver anything dangerous.

“Corey is a guy who’s really good at running at people with the ball. What we are looking for him to do now is when he gets in these advanced positions, to make the final ball more clinical and add up to more,” McKeown said. “There are a lot of things that look spectacular, slaloming through guys, but at the end what is the final product? For him, the next step is to really connect the pass or go alone and finish the play off.”

In the latter game, the U.S. found more structure in its play and had spurts of dominance over Real So Cal, but was still missing an authoritative dominance one expects from a national team.

“I think we need to learn a little bit more about how to deal with players that are bigger, stronger, and faster. Defending in numbers, not isolating guys 1-v-1, and really organizing ourselves in a way that we are difficult to beat,” McKeown said.

A player who was impressive was Cosmos Academy West goalkeeper Cesar Jerez. The Californian was very stable inside his box and extremely secure with the ball. He had couple of good saves that could have blown the lead for the U.S., and has a great boot as well.

“The next progression would be how better to organize things in front of him,” McKeown said of Cesar.

Others that made a splash offensively were Cesar Alba, Ivan Zonido, and Wilfred Williams.

Wilfred is a very strong forward with a great ability to turnaround defenders. He was able to use his strength to beat out double teams, one that almost lead to a goal, but his shot sailed just wide.

Cesar and Ivan connected as substitutes in the latter half of the match. Ivan has great speed and is really aggressive on the ball, while Cesar is cool and collective, never panicking and always making the intelligent pass. Eventually, the connection led to the third goal for the U.S.

“Ivan is an interesting guy because he does have pace, a clear knack for the goal, and is good in finishing off plays,” McKeown said. “Hopefully as a whole he could become more involved in creating attacking opportunities.”

The U.S. will wrap up scrimmage play and camp with rematches against Canada U15 National Team and New York Cosmos Academy West on Saturday evening. Hopefully until then, the Americans can work to get some payback.

“We definitely showed a lot of frailties,” McKeown said. “If we can clean that up I think we will be just fine.”