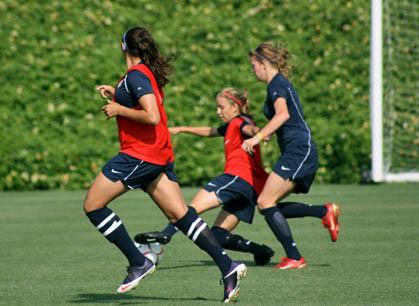 As one challenge ended, another began for U.S. Youth National Team coach Mike Dickey. Having spent a week guiding a U15 camp designed to prep players eligible for the 2010 FIFA U17 Women’s World Cup, Dickey is now overseeing a large group of U14s back at the Home Depot Center in Carson, CA. 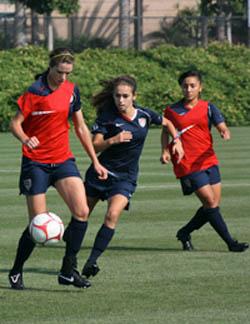 Girls National Team players in Carson, Calif.
And while the names and ages will differ, the objective will be the same: further development; continue to evaluate the top talent and plant seeds that will last beyond the week-long, few-times-a-year gatherings.

That last mission is probably the most formidable, because Dickey, and other youth coaches are competing against time. Three or four weeks out of a year is hardly enough to instill the kinds of principles that need to become instinctive and make for successful careers.

There are plenty of ways U.S. Soccer is trying to counteract this. One way, is to make itself more transparent, and open the doors to youth coaches in order to hopefully create more uniformity.

Coinciding with the U15 camp last week was a coaches’ symposium that saw some 30 coaches take part in a two-day event that provided a glimpse as to how U.S. Soccer runs its camps.

“In giving coaches a chance to see what it looks like hopefully we can aid each other and speed up the development of players in this country,” Dickey said. “Some coaches might have players of equivalent ability and as a result of this they can get ideas on how to make training better. Also, we’re hoping to find more players in working closely with coaches.

“Overall I thought it was great and the coaches and us got a lot out of it.”

But how much coaches like Dickey can get out of their pool of players is the big question and one that is far bigger than national camps.

“Other than when players come back to see us (for camps) we don’t see them as much as we need to,” Dickey said. “Hopefully we’ll catch them at various club or ODP events and we’ll talk to their club coaches. One thing we’re doing with this group is in our exit interviews when we give them evaluations we’ll have them email their coaches as well as a way to make sure the information is filtered to the people who are working with them on a regular basis.

“We’re trying to open up the communication to make their coaches a part of the process.”

So as U15 players departed from Carson, Calif. this weekend wrapping up yet another national camp, the real challenge for Dickey and U.S. coaches like him was only beginning.