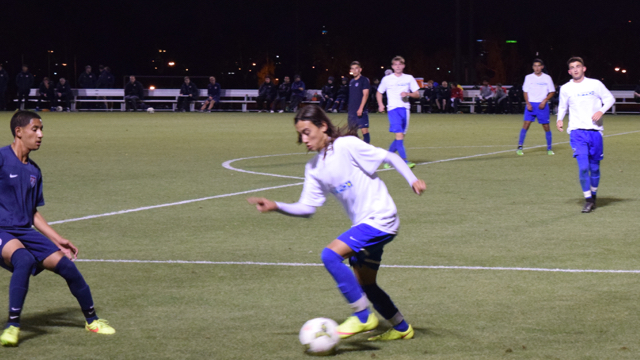 CARSON, California - The U.S. U14 Boys National Team wrapped up its camp on Saturday with an intersquad scrimmage. Prior to that battle between the group, the U.S. took on an older Cal South ODP team on Thursday as part of the April camp.

With international trips and more camps on the horizon, the U.S. coaching staff is using each opportunity to explore the player pool for this age and continue to call in new players for a look with the squad.

Thursday’s showcase was a challenge against a talented local side, but the U.S. had some good moments on the day.

The U.S. jumped out on the front foot in the first half and nearly had the opener in the 11th minute when Marlon Vargas picked off a pass and slipped in Kajiel Watt for a breakaway on goal. The striker ripped a shot right at the Cal South ODP goalkeeper who did well to push it wide for a corner kick.

U.S. did gain the lead in the 21st minute off a free kick. Marcelo Palomino hit the set piece into the sea of bodies at the top of the 18-yard box. The rebound came back to him and his volley was a lightning bolt into the back of the net before the goalkeeper could even respond. It was a magnificent strike from the Houston Dynamo Academy player.

Palomino kept picking on the ODP defense in the first half with eyes on a second goal. With five minutes left in the half, Palomino linked up with Indiana Vassilev for a clever combination at the top of the box that sent the Dynamo prospect in on goal, but the Cal South ODP goalkeeper stood his ground and made the save.

Cal South ODP took control of the game in the second half. Left winger Francisco Gomez, Corinthians, was a terror down the touchline and scored the equalizer eight minutes into the second half. He was slipped in behind the back four and then went around the goalkeeper for an easy finish into the open net.

Seven minutes later, Gomez megged his defender and then delivered a cross into the center of the 18-yard box for Gabriel Huarte, North Valley SC, to head home.

The U.S. struggled to break the pressure and some sloppy passes and questionable decisions led to the third goal for Cal South ODP. The U.S. goalkeeper tried to zip in a ball to the second line, but the winger’s first touch was a bit off and the left back for ODP, Kevyn Lopez (Empire SC), picked the winger’s pocket and dribbled right down the heart of the U.S. defense. Lopez finished the chance past the goalkeeper to give ODP a 3-1 advantage midway through the half.

The U.S. finally seemed to settle down after the third goal and find some cohesion between the players who entered the game in the second half. Palomino popped up again with a charging run forward before he was taken out about 20 yards from goal. Palomino took his own free kick and put it into the bottom corner of the net for his second goal of the game.

However, Gomez had the last laugh. He, once again, dribbled through the legs of his defender before putting in a perfect cross, which Juan Reyes (Corinthians) headed in.