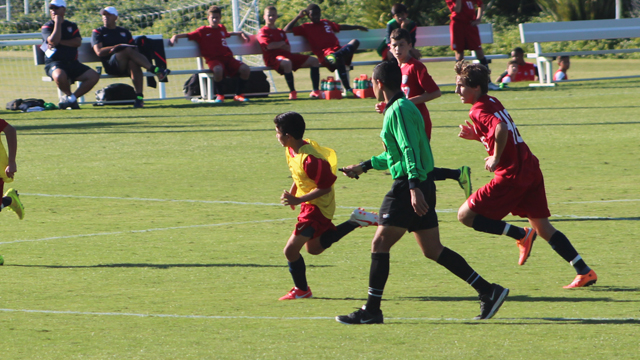 CARSON, California – The U.S. U14 Boys National Team (players born in 2001) finished its first camp on Saturday with a pair of scrimmages at the National Training Center. The U14 BNT played an inter-squad scrimmage and a game against Arsenal FC (Temecula, California) U14 Academy team.

Yellow jumped out to the lead early and never looked back. Matteo Ritaccio’s (BW Gottschee) free kick from 19 yards out near the right corner flag hit off the crossbar and landed in front of a pair of Yellow players. Nicholas Fernandez (Chicago Fire) hit it home for the opening goal in the third minute of the game.

Kejiel Watt (New York Red Bulls) doubled the lead two minutes later with an easy finish from 15 yards out. Gabe Segal (Bethesda-Olney) did the hard work on the goal. Segal snuck in behind the Red defense and then went around the keeper. He played it back to Watt for the finish into the open net.

Red tried to answer the early pressure from the Yellow team and had a few moments of positive play. Red’s best chance of the opening 15 minutes came from Indiana Vassilev (Storm SA) on a shot from 20 yards out. Alex Rando (New York Red Bulls) made a diving save to keep the shot out of the goal.

Red cut the lead in half in the 22nd minute when Vassilev made a charging run through the center of the field and toe poked his shot home. It was as close as Red would get on the day.

Watt had a pair of very good chances to add to his lone goal for the first half, but he was denied both times on the doorstep. The midfielders from Yellow continued to provide the service for the New York Red Bulls prospect and were rewarded for their work.

Watt scored twice in the final minutes of the first half to complete his hat trick before being subbed off at the break. Watt’s second goal of the game came on a breakaway when he split the two center backs. Duncan Wegner (CASL Railhawks) made a good stop on the initial effort, but Watt easily chipped him on the rebound.

Seconds later, Red gave away the ball in the center of the field and Watt split the two center backs again. He did not allow a block this time as Watt finished past Wegner to give Yellow a 4-1 lead at half.

The second half was much of the same with yellow adding two more goals to the tally in the final 30 minutes. Ritaccio scored the first one midway through the half off an assist from Segal.

Segal scored the final goal of the game off an assist from substitute Angel Ariza (West Coast FC).

Arsenal stormed out of the gates with high pressure against the youth national team. The U14 BNT struggled to break the pressure at times and Arsenal tried to capitalize on the mistakes.

The first goal came in the seventh minute when Eduardo Castellanos intercepted the ball in the middle of the field and then drove a shot into the corner of the net for the early lead.

With only a few minutes left in the first half, the U.S. looked like it had found its opener. Efrain Alvarez (Chivas USA) slipped Luis Arriaga (Santa Rosa) in on goal after some nice build-up play from the youth national team. Arriaga finished, but a late flag from the assistant referee negated the goal and preserved the first half shut out for Arsenal goalkeeper Nico Pavez.

The second half substitutes changed the game for the U.S. and were quickly rewarded for the increased level to the game. Ulysses Llanez (Chivas USA) scored the lone goal on a wonderful individual effort down the left side that culminated with a classy finish.

Llanez nearly put the teams back on level footing seconds later when the U.S. quickly pressured Arsenal off the kick-off and exploited a turnover. Llanez’s shot hit off the post though and was cleared from danger.

Timothy Bielic (Sockers) had the best chance late when he tried his luck just outside of the box. Pavez, who is also a goalkeeper with Servite High School, made the save to hold on for the win.